Tomac on his amazing ride through the field at SLC6 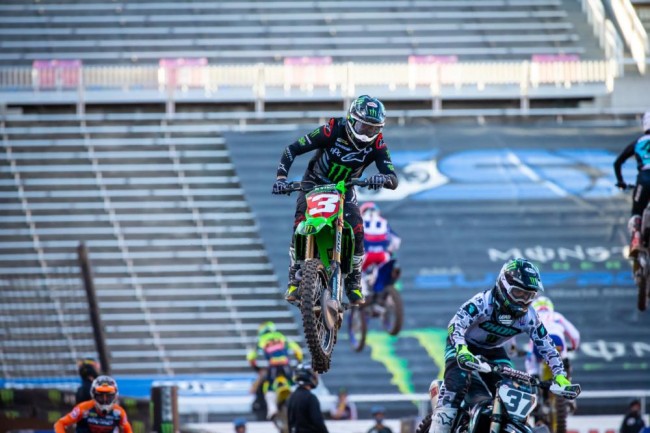 At SLC6, Eli Tomac produced a fantastic ride through the field. The Factory Kawasaki rider was pretty much last going up the start straight and understandable isn’t happy with his starts.

“The first turn was just a joke. I was way out at the back, I was probably the last guy on the inside, I went defensive and that didn’t work in the first turn. Mookie and Barcia I think both got up the inside of me and really from there I just had to pick my way through the pack. The first lap was a little chaotic, I made a good move around the second, third turn and then I went to work. I felt like I could make easier passes this week compared to the previous track. To get to the front and finish second, I’m satisfied”, Tomac stated in the press conference.

Tomac knows his starts are his weak area but at this point he’s not even sure what he can do in order to improve them.

“I don’t know. At this point I may as well let everyone go and then roll, right? I don’t know, just to try and be a little better. I’m trying to protect the inside but it hasn’t worked the past two rounds so that’s it. I just have to be a little better, there’s a lot of good guys on the line”.

After a disastrous start leaving him way behind the leaders, in the past it might have bothered Tomac but no this year, he stayed calm and picked the rights off left, right and centre.

“You know, the most nerve racking is the first lap. When you’re buried, so many things can happen out of your own power and that’s what’s sketchy about starting at the back.  There was a hang up in turn two and turn three was pretty tight and I got close to Bloss on the finish line bowl turn. It’s a situation I don’t want to put myself in but I was able to make passes quicker tonight compared to Sunday”. 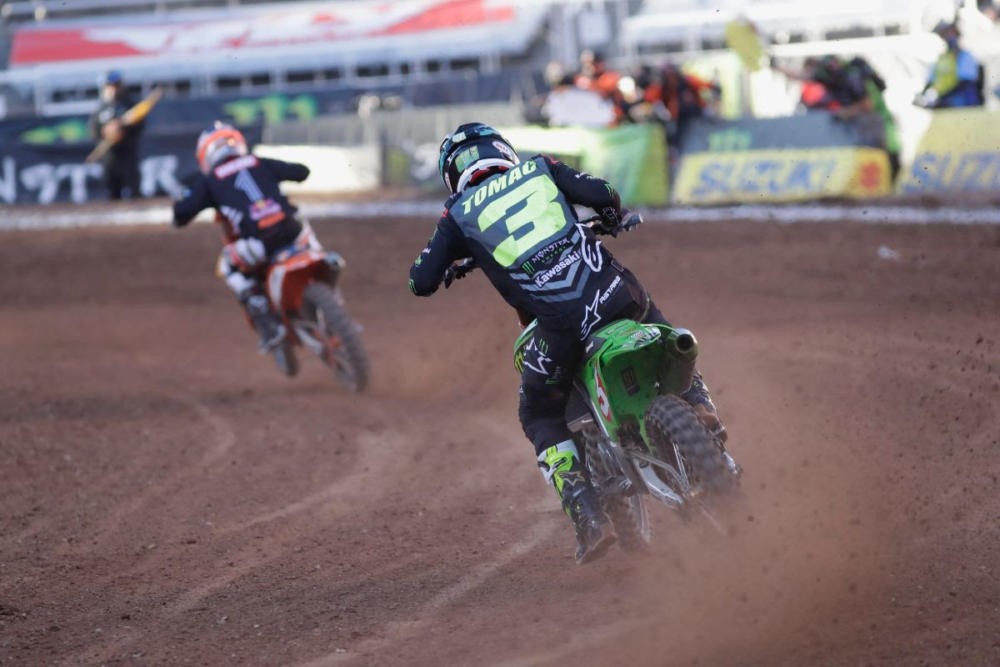 Tomac was clearly pushing the first half of the race but when he caught the Osborne, Roczen and Webb group he started to ride conservative  to not do anything stupid and blow his title hopes.

“Well, when it was Zach, Cooper and Kenny, once I caught that group, I was thinking, I’m right in this. To be honest I thought it was going to turn into last Sunday when two broke away and I was out of it but I was able to get there. I tried to push to the front but at the same time I was kind of in conservative mode there, that was it and I was happy with second at that point. After the race I thought I probably should have been going down the inside rut (down the whoops), I was one of the fastest in the whoops and I was chatting to my Dad about that when we were driving back.  I know I should have been hitting the inside line but I think I should have been checking out more on the triple because I was going too fast through there and then going outside, it was kind of a wash there. That would have helped to stay a little bit closer”.

In the past, things haven’t went Tomac’s way in a bid for an AMA Supercross title but the American says this year the consistency has improved and he had the bike dialled right from the start of the season which has helped him massively.

“Consistency in general. I’ve always had these weird two or three races when I look back to 2017 or whatever year, it’s been somewhat close. Consistency and that’s really it – more level headed and less up and down emotions this year. I felt like I’ve been on the same kind of level the whole time. In previous years I’ve struggled with having everything dialled in right away, other years I’ve had slow starts for the first 4-5 races and then we’d get the bike dialled in. This year we were ready to go from the get go and that’s been big for me because I know I can handle the distance – previous years I haven’t been able to make it for the 20 minutes, I was blowing myself up or something like that or have a crash or whatever. Being ready from round one has helped”, concluded Tomac.

On Sunday, Tomac is very likely to clinch his first AMA Supercross title, it’s been a while in the making but he finally looks to be making it happen.