Tomac on clinching his first SX title: A huge relief 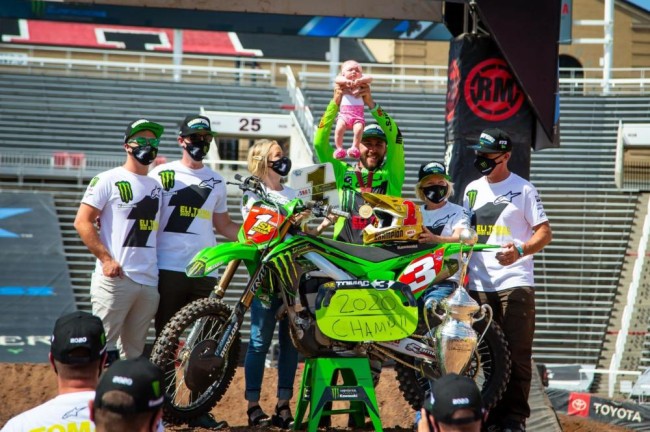 “You know, the worst part of it was Wednesday to Sunday, that was the worst, it was mad because I was so close. Just sitting around Thursday, Friday, Saturday and finally Sunday gets here. You just try go do your thing but when it’s the final day and it’s there, the weight is heavy. I felt like the whole day I carried it really well that way, it’s nice to have a 19 points gap, you feel like you have a lot of wiggle room. It’s so cool (to have won the title), I think back to those other seasons were I was so close and basically just give it away at the end or was those bad starts cost me. Man, it’s so cool to put it all together”, Tomac stated in the press conference.

The Factory Kawasaki rider was pleased to finally secure the title but says it was a weird way to win it with no fans in the stadium but is still pleased they were able to finish the season.

“When it got to the half way point, I was thinking, this is going to be long. The good thing is that Cooper and Kenny were behind me and they weren’t catching me so I was super comfortable just cruising around. Then just like that and it’s over, you get to the finish line and it’s done, it was kind of weird. It really is a bummer the crowd weren’t there and the people/fans but there’s nothing we can do about it. It’s a life long achievement and it’s just so cool”.

Tomac has been close on a number of occasions and always stayed motivated to win the title despite things going wrong in the past.

“I mean, the motivation is to get this title. It’s been nagging since 2017 and I feel like it’s been right there, maybe not every time but especially 2017, that was so close. This is literally my dream, the 450SX Supercross championship, that’s what you chase, that’s why you get up in the morning with motivation. I still totally love riding my dirt bike, I love racing and being competitive – it gives me the motivation to wake up. Today was heavy but it wasn’t terrible, because of the 19 point gap and with the way I’ve felt all year, a steady eddy and solid so I was totally freaked out on the start line”, Tomac stated. 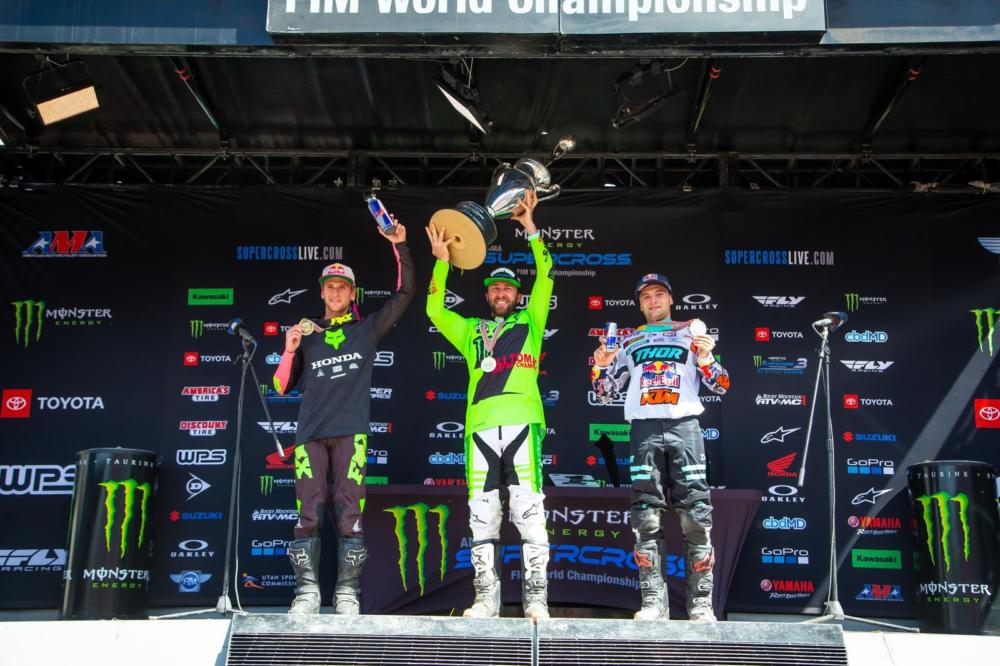 Tomac on top of the box! Pic: Feld Entertainment

In terms of racing in America, Tomac has now won it all so it’s a huge relief as he’s been working all his life to make this happen and he acknowledges time was running out for him to make it happen.

“It’s obviously done and dusted now but when I wake up tomorrow I think I’ll really feel it. I’ve said it a couple of times now but I feel like I was maybe starting to run out of time, I don’t know but just when you look at the past. The past is the past and you don’t want to base everything off that but I’m 27 now, I’m not sure if I’m the oldest guy to win this the first time but I think I might be. I’m 27 and there’s people that doubt you that way and especially with the way I’ve blown it a few times. Being able to fix that, the inconsistency is a huge relief that way”.

Tomac is close with his Dad as he trains him and the pair have a close relationship, it was interesting to hear Tomac open up about their relationship. Tomac recently became a father to so win the title on fathers day made it even more special.

“It’s really cool that we were able to stay together with myself and my Dad. A lot of the times that’s not the case as everyone has got their own deal. We have both been chasing this for so long, you know? To get to the highest level and to get the championship, it’s a bit of a bummer they couldn’t be right there at the podium, that totally sucked but super cool for them to at least see it. We got a little photo at the finish line too, a pretty rad day. There’s days were we (his dad) do disagree on things. He might say hey you need to go out there and do this section one more time or get this time. That happens but we’ve been able to keep the relationship that way. I don’t live at the property anymore so there’s good space there and I think the way our mentality is, we are kind of the same dudes, a little bit more mellow that way.  We make it work”, stated Tomac.

Aldon Baker has had a lot of Supercross success winning the title with a number of his riders but Tomac feels he’s never been at a disadvantage on the program he runs with his dad – this year he just sorted out his inconsistent results and felt ready to go from round one which he feels made the big difference.

“You know, when you look at those guys and that whole program, they’ve won it so many times. Really, it’s preparation and being ready from the get go at round one which you have to be. I mean, you can make up throughout the season but that was the difference this year too, we were ready from round one and I didn’t have to tweak around much finding comfort with the bike and getting through the 20 minutes. From round two I was back to my old self I felt like, we were fired up and ready to go. I’ve never felt like I was at a disadvantage with my program but it was just those inconsistent races were I’d have blown the points – I got rid of that”, concluded Tomac.