Tomac on a forgettable night in San Diego: It could be worse! 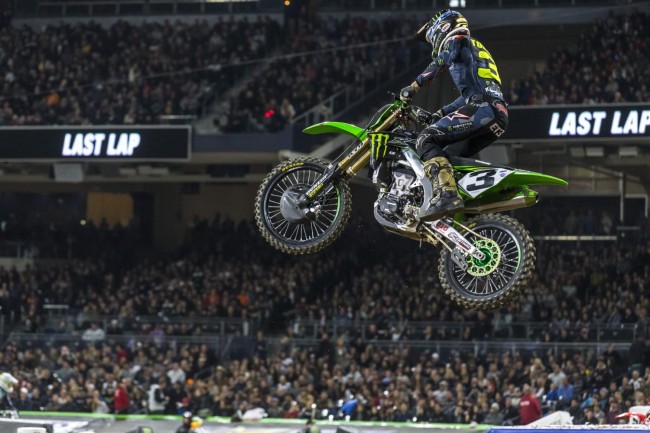 Both Kawasaki riders would qualify directly out of their 450SX Heat Race with Tomac finishing third out of Heat 1 and Grant fourth from Heat 2. When the gate dropped on the 450SX Main Event, Tomac and Grant collided due to a pileup in the first corner and ended up on the ground. Due to the collision, Tomac was unable to continue the race and was forced to retire from the competition. Teammate Grant finished 11th, with an incredible come-from-behind performance after starting the race in 21st.

“I was feeling really good and knew if I got a good start in the main event, I had a chance at the podium.,” said Grant. “After getting caught up in the first corner carnage, I was way back and just tried my best to charge for 20 straight minutes. 11th place isn’t terrible but I’m hungry for more. I’m looking forward to the east coast dirt.”

“I felt great on the bike all through qualifying and into the heat race,” said Tomac. “I got off to a decent start in the main event and ended up catching my handlebar on another rider in the first corner, which caused us both to go down. It’s unfortunate that these things happen, but it could be worse.”

Monster Energy/Pro Circuit/Kawasaki riders Adam Cianciarulo and Joey Savatgy launched out of the gate in 250SX Heat Race 1 in first and second and never looked back. Cianciarulo would capture his second heat race victory of the season, with Savatgy second. When the gate dropped on the 250SX Main Event, it was the No. 17 Kawasaki of Savatgy capturing his first second holeshot of the night on his KX™250F, followed closely by his teammate Cianciarulo in second. Cianciarulo took over the lead on the opening lap and would lead the field for 11 laps before slipping to second place. Cianciarulo fought hard to regain the lead but never succeeded. When the checkered flag waved, Cianciarulo crossed the line in second and Savatgy fourth. Both Monster Energy/Pro Circuit/Kawasaki riders moved closer to the championship points leader, with Savatgy only four points down in second place.

“I’m so pumped on my start,” said Cianciarulo. “I’m more excited about the holeshot than I am the podium finish. I’ve been working so hard on my starts and to finally see a result means a lot. Overall, today was really good for us and I’m looking forward to the break as the East Coast guys start racing.”