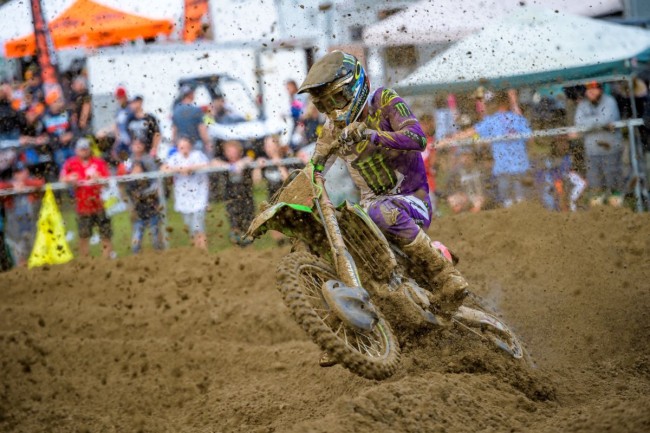 Despite extending his points lead to 38 points, Eli Tomac has surprisingly only won two of the last ten motos of the US Nationals. It’s a ratio that contrasts sharply with the first three rounds of the season where he won four of the first six motos and represents a big change for the man that was usually the dominator of the series in speed and wins.

Now Tomac is benefiting from being more consistent than his rivals but seemingly without having that electrifying speed every moto (although it is still there at times). And, after a 2-5 at Millville, Tomac admitted he was frustrated at not winning once again.

Tomac was right on Webb in the first moto for the win going into the final couple of laps, but back-markers got in his way and prevented him from getting a shot at the pass. Although he was angry at the time, a more philosophical Tomac said at the end of the day, “I mean I got stuck behind that guy bad, but at the same time there was as only one fast line and he never wanted to move so that was that. The first moto, we had that one good line going, so if someone was there you couldn’t get around them right away.”

A bad start and crash in race two then left Tomac even more frustrated and he admitted the racer in him wants to win, even if a 2-5 for third overall and another podium was good enough to extend his points lead.

“The second moto I was a whole different guy, it wasn’t good,” he admitted without being able to explain why it happened. “But you get older and a little bit more calm mentally, with the experience that comes along with it, we have done a good job of managing it (bad days) mentally, so, we’ll take it.

“The big picture, yeah I’m pumped (extending points lead) but today’s picture, I’m pretty frustrated after that second moto just because I’m a racer, right? But anyway, we are thinking big picture too.”

With the next round at Washougal, a rare slick track on the US calendar, Tomac, who seems to prefer to a loamy wide open circuit so he can be aggressive on the throttle, may have to use his experience and ride with patience and the big picture in mind once again.