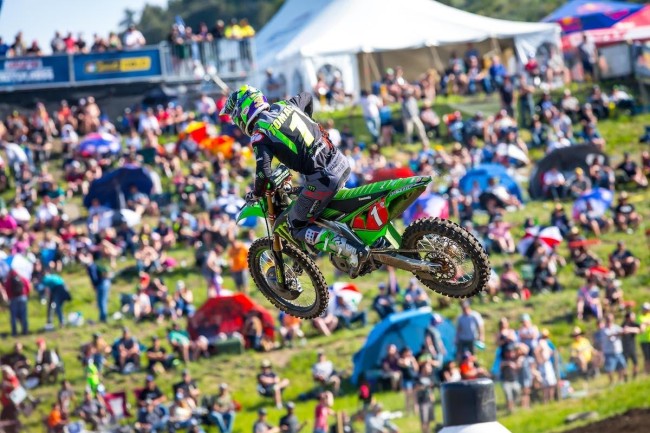 Eli Tomac took the overall win in unusual fashion at High Point by going 3-2 on the day! Tomac didn’t quite have his usual blazing speed, finishing third in race one behind Jason Anderson and runaway leader Blake Baggett after a tip-over.

Tomac battled Anderson again for a long time in race two but finally got the Husky man then Cooper Webb at the end to clinch the overall ahead of rival Ken Roczen.

Roczen had a terrible (for him) first moto in sixth, getting caught and passed by Musquin and Osborne with the German saying he made the wrong change to the bike and would revert to his original settings he used for round three in Colorado for the second moto at High Point- and what a difference it made!

Roczen didn’t have the greatest start but worked his way into the top five, including passing Tomac before quickly getting to early race leader Webb and taking the lead with a superb inside line while railing the rut on the pegs like Stefan Everts. Roczen pulled an eight second gap to win the moto for second overall and he and Tomac are now TIED on points as they head to round five in Florida!

Jason Anderson faded slightly in race two for fifth but still took the podium while first moto winner Blake Baggett crashed out of race two. Marvin Musquin had the speed to win but had a terrible start in race one and crashed out of turn one in race two to card 4-7 scores for sixth overall.

In the 250s Hunter Lawrence took his first moto win in the States in only his fifth moto racing there and did it in style working his way into the lead, passing Justin Cooper to do it and pulling away from Ferrandis and Cianciarulo.

Ferrandis would go down, allowing the American to take second and things got worse for Ferrandis with a terrible start in race two forcing him to come from way back to take fourth nicking the position off a fading Colt Nicholls in last couple of laps.

Nicholls has led race two for the first half of the race from Cianciarulo, Sexton and Lawrence, all four looking like they had the speed to win, but when Cianciarulo passed Nicholls he sprinted and only Sexton could go with him as Lawrence, try as he might, just could not get his way by Nicholls in time. Once he eventually made the move he was eight seconds behind leader Cianciarulo who took the win and his fourth overall in a row to stamp his authority on the championship!

Justin Cooper had a terrible day going from first to sixth in race win and then a ninth in race two after a bad start and is now 26 points behind Cianciarulo in the championship as they head to Adam’s home state of Florida for round.