Tomac and Cianciarulo on their wins at High Point 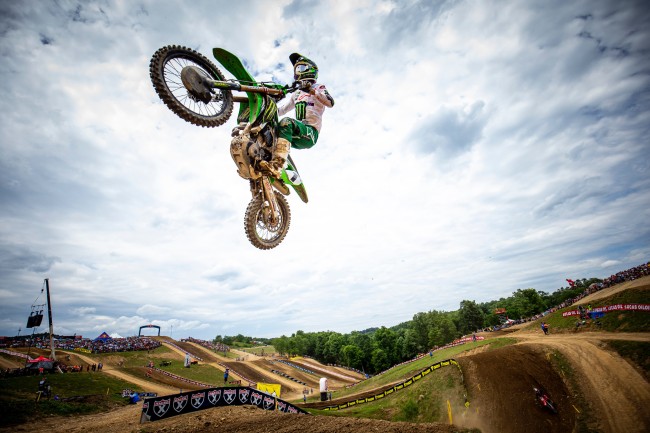 After qualifying with the fourth fastest lap time, Tomac and his KX™450 lined up for 450MX Moto 1 determined and ready to attack the historic High Point Raceway track. As the gate dropped for Moto 1, Tomac got a good jump but was pushed wide in the first corner, however by Turn 4 Tomac weaved through the competition into second place. From there, Tomac would begin to mount a charge on the leader, but on Lap 4 he made a small mistake and washed out the front end of the motorcycle, briefly placing him on the ground. He quickly regrouped, finding himself in fourth place and was able to eventually work into third position, where he would finish the race.

Determined to recover from his first moto mistake and looking to reclaim the championship points lead, Tomac did not get the best jump out of the gate finding himself outside the top-10 off the start and he once again had his work cut out for him as his title contender rivals were out front early. He made quick work of his competition, eventually catching up to the leader by Lap 15 with two laps to go. Due to the inconsistency of Tomac’s competitors, 3-2 moto finishes would be good enough for the overall. Tomac was able to reclaim some valuable points in the championship hunt and is now tied for the series championship lead with 176 points. When racing resumes next weekend in Jacksonville, Florida there will be two competitors donning the red plate in the 450MX class.

450MX Rookie, Joey Savatgy aimed to have a bounce back weekend at High Point after a challenging debut at Thunder Valley and the No. 17 machine was able to do just that. In Moto 1, Savatgy was able to earn a top-3 start and eventually settled into his own pace crossing the finish line in eighth place. In Moto 2, Savatgy rocketed out the gate to grab the holeshot and then fell back into second place, where he remained for nearly the first half of the race. Still working himself into race shape, Savatgy battled with the top contenders and would ultimately settle into sixth place, earning him an 8-6 score for eighth place overall on the day.

Eli Tomac: In racing a win is a win and although today wasn’t the prettiest win, we will take it. In both motos we were a bit buried off the start and between the race lines and lappers, it made it difficult to go forward. I was disappointed with my tip over in Moto 1 because I felt like we had what we needed to move into first but that obviously set us back. I am proud of the fight we showed today and that we are leaving here today tied for the championship. I am excited for next week’s event at WW Ranch, I had a good time when we raced the GP there in ’17 and I usually just enjoy racing anytime we get to go at it in the sand!”

Joey Savatgy: “Today was a big step in the right direction. After Thunder Valley, I put a solid week of testing with my Monster Energy Kawasaki crew in California and continued to do my work in Florida this past week and I believe the results showed. Because of my injury, I am still racing back into shape, but man I am stoked with how today went. My KX450 was a rocket ship; I got a second place start in Moto 1 and the holeshot in Moto 2. I can’t thank my team enough for all of the hard work over the past two weeks to get me comfortable on the bike. I am looking forward to the new venue next week at WW Ranch as it is close to home for me. “

Adam Cianciarulo: I am just speechless at the moment. Today was another 2-1 victory and in both motos we had our work cut out for us. The fans at High Point honestly give the Red Bud fans a run for their money. They were absolutely insane and we could hear them the whole time we were racing. I am so grateful for my Monster Energy/Pro-Circuit/Kawasaki team and the people around me that allow me the opportunity to succeed. I am merely a passenger in this journey and couldn’t be more grateful. I am really excited about next weekend’s race at WW Ranch, as that is the type of soil I have grew up racing on and excited to race in front of the home crowd!”

Garrett Marchbanks: “I guess you could just say High Point isn’t my track. Last year I crashed in the exact same spot and it ended my season. I am thankful to be leaving here today in one piece and just banged up and bruised. We will go get everything checked out this week and regroup to fight another day.”