Tomac and Cianciarulo on their contrasting results at SLC 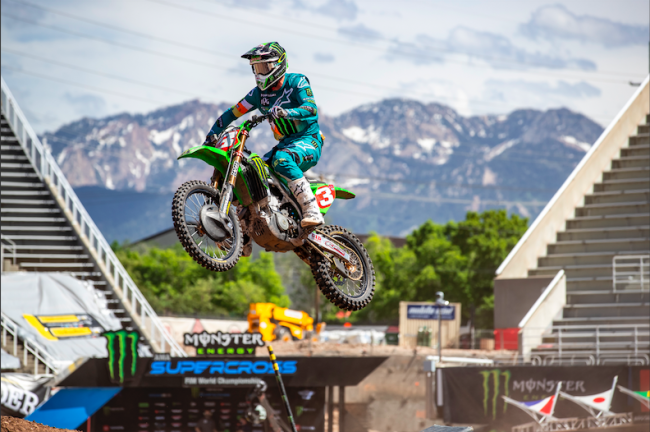 Foothill Ranch, Calif. (June 1, 2020) – Round 11 of the Monster Energy® AMA Supercross, an FIM World Championship returned in Salt Lake City, Utah after 85 long days with new rules, no fans in attendance, but the same goal to finish this extraordinary season with the title. Monster Energy Kawasaki rider Eli Tomac wasted no time showing the break did not disrupt his tempo as he earned the 450SX victory, while Monster Energy®/Pro Circuit/Kawasaki’s Garrett Marchbanks returns with a 250SX podium-finish in third.

Tomac and his teammate Adam Cianciarulo kicked the day off by picking up right where they left off, qualifying 2-3, respectively. 450SX Heat 1 saw Tomac grab the holeshot aboard his KX™450 to lead every lap to the finish line for the first victory of the day. Cianciarulo also rode impressively in the second heat after shooting out in second, where he would stay for the remainder of the race.

As the gate dropped on the 450SX Main Event, Tomac charged the dusty track in fourth. Just nearly missing his teammate who went down right in front of him, Tomac was able to stay steady and advance to third by Lap 2. Just as he began to build momentum, Tomac was passed by the two other title contenders on Lap 6, but he persisted and began to maneuver his way to the front passing each of them one-by-one. Before the halfway point of the race, Tomac had reached the front, leading the remaining 18 laps and grabbing the checkers to extend his points lead to eight over the competition.  Cianciarulo lined up excited to compete in the 450SX Main Event after the long break but unfortunately crashed out of the race due to an early-race mistake.

Eli Tomac: Gosh, it felt so good to get back to racing. We really couldn’t have asked for a better day overall. The track was super slick in certain areas and we were drifting the bikes through some of those flat corners, which was a lot of fun, but you had to be careful at the same time. I didn’t get the best jump off the start in the main but was able to tuck inside and quickly recover. It was definitely a scary moment when Adam went down because I was already in the air and his bike bounced up and I had nowhere to go but up and over his bike. I’m glad he’s okay. Overall it was a good day and I am already looking forward to Wednesday.”

Adam Cianciarulo: Man, I am so frustrated with how today ended up. I cannot tell you how stoked I was to be back racing my KX450 with my whole Monster Energy Kawasaki crew. I felt good all day, rode solid in my heat race and got a great jump in the main event. I just made a small mistake that cost me big time. I’m pretty sore from getting ran over, but we’re going to let the body rest and take all the necessary steps so we are ready for Wednesday.”