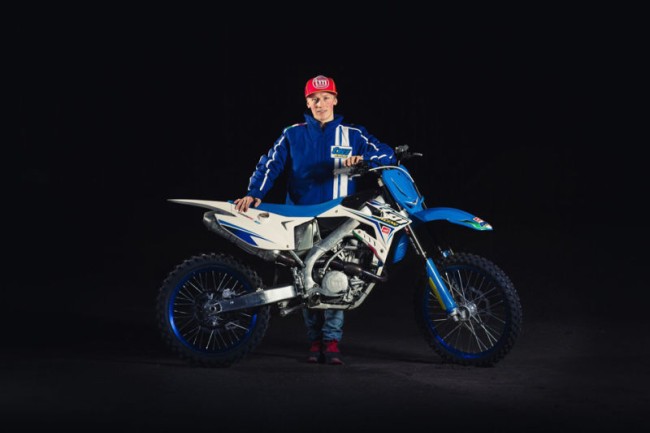 The Danish KK TM Racing Team has had a start-season in the world elite with rich experiences and is now ready to attack 2016 even better equipped. The status of TM grows, and since the approval as an official Youth Stream team and the official Factory supported team the new name TM Satellite Racing Team.

Preparations for the new year has started, and just after New Year we head to Sardinia where we do the first test of race engine and suspension, together with the people from the TM factory.

This year the team had 3 rider in three different European classes, but the model changes for the upcoming season. 2016 will be the first year with a rider in MX2 GP. Eddie Hjortmarker from Sweden will be the rider in MX2 to present the team on TM bike. At the same time continues Spanish Gerard Garcia in EMX300. The team is happy to continue the relationship with Garcia and TM Spain. Adam Einarsson from Sweden and Rasmus Kamaja from Finland will both compete in the European 125 class

Team manager Carsten Andersen expects a lot of his boys in the upcoming season, where he hope for a season without injuries. Eddie is a serious guy who do his sport 100% he says, i know that we got the right material and the nessasary support from the factory to make some good progres and result with Eddie, so i am very confident to have Eddie in MX2. Thel contract with Eddie includes the Sweden Championship in the MX2 class. Eddie will be part of Team TM Factory team in Sweden, where the Swedish TM distributor, Magnus Andreasson is team manager. Our two young talents in EMX125 is just 15 years and I see a good future for both rider, i know they have the necessary support from their family to do progress and result. Also like Eddie Adam Einarsson is part of TM Factory Team in Sweden. Gerard Garcia had a mixed season in 2015, with minor injuries, but he moves during the winter to Belgium, this gives Garcia some options to make the practise different compare to Spain where most tracks is hard.

Eddie about his move to TM – This is a step that I feel will develop me as a rider and provides an opportunity to establish close cooperation with the factory which is invaluable, not least for the future. It is clear that it felt a bit controversial in the beginning to change brands, but because my sponsors Big Balls MX in Sodertalje, Duells, Eurol and Tork supports me is not the slightest doubt. What I have seen so far of the bike and engines are only positive. I know that TM is good bikes that you can perform at. It is extremely motivating to get this chance, says Eddie.

TM Racing Satellite Team also in 2016 have following line up in ONK.