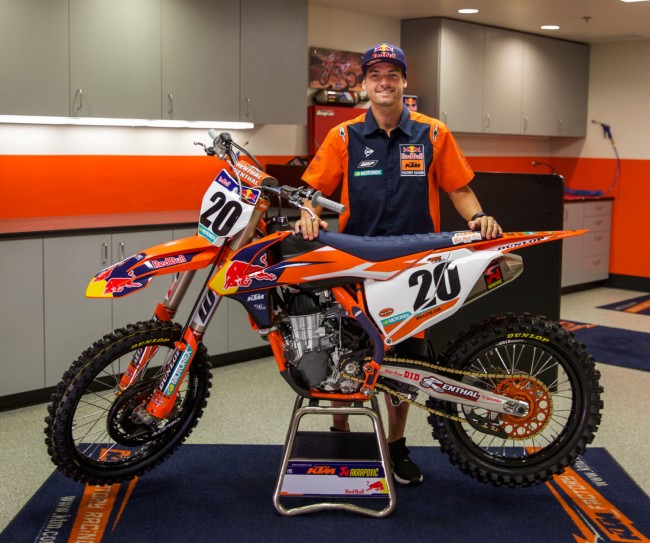 The 28-year-old Michigan native claimed an AMA Supercross Lites West Championship in 2011, along with a host of career podium and top-five finishes over the years. Tickle has proved his merit as a 450 class podium contender, most recently capturing a pair of third place finishes in 2017 at Toronto Supercross and High Point MX National.

Tickle missed the second half of the AMA Pro Motocross Championship due to a shoulder injury but he is READY TO RACE into the 2018 race season, beginning with the Monster Energy Cup and Red Bull Straight Rhythm in October.

Tickle:“I’m really looking forward to the opportunity to work with Roger, Ian and the whole Red Bull KTM Factory Racing Team. With the success both European and US teams have had in recent years on the new KTM 450 SX-F FACTORY EDITION, I’m really looking forward to the chance to race the KTM for myself. The results and numerous championships they’ve earned speaks volumes for the brand and I’m really hoping to make the most of this awesome opportunity.I’m especially excited to train at Bakers Factory with Aldon Baker and alongside my new teammate Marvin (Musquin). This is the first time in my pro career that I’m in an all-encompassing training program where riding coaching, fitness training and riding alongside some of the fastest guys in the sport are all a part of my daily routine. I really want to take full advantage of everything being offered and show what I believe I am capable of.”

Roger De Coster: “We have always seen a lot of potential in Broc and we look forward to giving him every tool available to our team to be successful and make the most of this opportunity. We feel Broc’s demeanor and personality both on and off the track are a good fit to be Marvin’s teammate and hope they work well both riding and training together.”