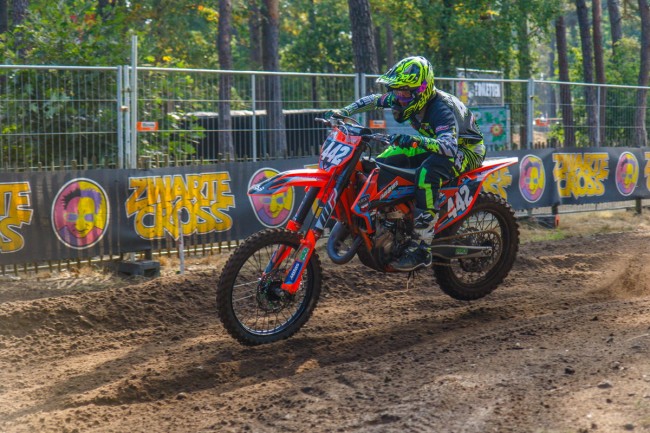 Decrease Font Size Increase Font Size Font size Print Send
It’s not the first time that Kjell Verbruggen has made a name for himself in his 125 rookie season. However the young Dutchman caught more than a few people by surprise at the 2018 Zwarte Cross. Kjell qualified eighth on Friday, while team mate Mario Lucas had to settle for 16th.

The infamous Loco Arena was atypical desolate and quiet on Saturday morning. Due to the dusty track conditions the 125cc opening moto had been postponed from Friday to early morning on Saturday. Verbruggen was seemingly unfazed by the change in the schedule. Not only did he take the holeshot, he ran up front for 4 laps before Emil Weckman, one of the leading EMX125 riders, passed him for the lead. Eventually Kjell came home second. Mario suffered a mediocre start in the opening race, but things took a turn for the worst when he hit the deck in the second lap. Tenth place was all the Spanish 125 champion could muster.

In stark contrast with the first moto a massive and excited crowd lined the track for the final race. Once again Kjell catapulted his KTM 125SX to the holeshot. Although Kjell was soon ousted from the lead by Elzinga, he did control second for most of the 25 minute plus one lap sprint. Title contender Raivo Dankers relegated the #442 F4E Racing rider to third at the finish line. Yet Verbruggen had been one of the fastest guys on the track all day long. In the ultimate championship moto Kjell recorded the second fastest lap of the race.

After a terrible start Lucas managed to recover well in his final moto. On a track where it was particularly hard to overtake the likable Spaniard remounted to 11th, handing him 10th overall. While Wannes van de Voorde was sidelined in Lichtenvoorde due to a collarbone fracture sustained just before the race another Belgian racer gave the team something to cheer about. Support rider Baptiste Beernaert came home sixth twice and thus placed fifth overall equal on points. The 12-year old had to face much more experienced riders in Lichtenvoorde but ended up the highest ranked Belgian 85cc rider for the day.

Kjell Verbruggen: “This last Dutch Masters of Motocross race went a lot better than expected. In both motos I managed to grab a clean holeshot and I was able to lead on both occasions. It was also nice to keep the tow with Emil Weckman until the finish line. Overall Zwarte Cross was an awesome experience! I’d like to thank the entire team, Jimmy (Verburgh) and all the sponsors. After tasting a result like this you always want more of course!”

Mario Lucas: “To participate in such a race staged at big festival was a pretty unique experience in its own right! It was difficult for me to adapt to the track in time practice, which meant I didn’t have a good time. In the opening moto I was able to make a lot of passes in the first lap but a crash in the second lap ruined a good final result! The start was super important in Lichtenvoorde and I certainly experienced that in the second heat… Which is a shame, because I definitely felt I could’ve done more than tenth overall.”

Jimmy Verburgh, manager F4E Racing: “To end the Dutch Masters of Motocros like this was the icing on the cakes for us. Kjell put in a great performance in Lichtenvoorde, so that was great to see. This is the best motivation to work hard now in preparation of the following EMX125 rounds in Lommel and later in Assen! Mario did not have luck at his side, but he kept on fighting. We are also pleasantly surprised by Baptiste. He had two very good starts and rode well in a field with a lot of international experience.”