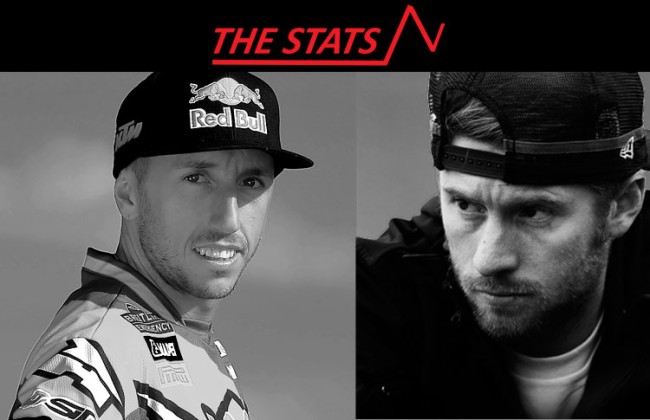 This is the rivalry everyone is talking about: Cairoli v Villopoto! So we thought it would be fun to compare their mx statistics to see if it could provide a clue to what we should expect for the 2015 MXGP season. Although they have competed in two different championships until now we still thought it would be worthwhile.

We calculated this by starting from the year they first competed the whole championship and scored points, Cairoli 2004 and Villopoto 2006.  Every year has been included since, as well as years were injuries put them out of championships.

Cairoli’s stats above are impressive, especially his 100% record on the 450. The concerning fact for Villopoto is he has only completed two motocross championships in six years since stepping up to the 450 machine but we wondered how it would stack up if we exclude the years they were injured.

Clearly this shows how much Ryan Villopoto has dominated in America. When healthy he has been unbeatable, winning every championship he has completed! While Cairoli has 100% record on the 450 it was his 250 stats which pales against Villopoto’s.

This time we calculated by starting from the first time they scored points, Cairoli 2004 and Villopoto 2005 (9th round).  Every race has been included since,as well as races missed from injuries.

Again we recalculated it by excluding the races were injuries meant they could not enter the event. The event at which any injury occurred was included as they started the race.

Cairoli’s career and 450 winning percentage is significantly higher (Career – 12% higher, 450 – 32% higher!) than Villopoto’s including races missed by injury. However RV has a much better win rate on the 250 (20% higher than TC).

What I find interesting when races missed with injuries are taken into account, is that Antonio Cairoli’s 450 win percentage (49.4%) is still higher than Ryan Villopoto’s (46.1%) showing Cairoli’s strike rate has been venomous but again its the 250 stats which let the #222 down next to Ryan.

This is calculated the same way as Overall Race Wins.

Over All Podiums – Excluding Races Missed with Injury

Once again the stats above shows Ryan Villopoto has sucombed to injuries much more than Tony Cairoli. However what surprises me when races missed with injuries are excluded, is that Villopoto has a 16% higher podium rate over his career and 12% higher on the 450 than Cairoli! With Cairoli known for his incredible consistency in MXGP I was not expecting such a difference.

What does it all Mean?

The statistics tell us than Ryan Villopoto is more likely to miss races by getting injured, but when healthy he has yet to be beaten in a motocross championship! The question is would he have missed so many races if it was not for racing supercross as well?

Cairoli can take comfort in knowing that his stats show he is more likely to make all of the races and his race win rate on the 450/350 is higher than his competition. Along with that is the fact Cairoli has never been beaten in a MXGP title.

Conclusion?… Sit back and enjoy because we are in for a heck of a battle between the two greatest riders of their generation!