The next generation: Gajser v Jonass 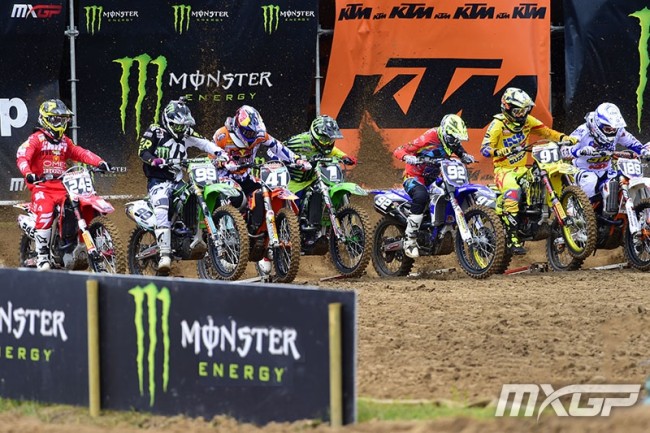 Both are just 18 years old, both are signed to long term factory contracts on rival teams and both are going for their first world title.

With four rounds to go in the MX2 world championship Pauls Jonass leads teenage rival Tim Gajser by four points, the next wave of talent following the Herlings/Roczen era is here, and they are here to stay.

Jonass has been a revelation this season and neither he, nor KTM, thought the Latvian would be in a position to challenge for a world tile in his first season as a factory rider. But his work in the winter with Stefan Everts has given Jonass the physical capacity and the mental strength to believe he can win the title.

His strengths are his consistency and his sand skills and with Mantova this weekend and Assen the week after, these next two rounds will be Jonass’ chance to get some points on Gajser heading to the final two rounds North America which may suit the Honda man’s style better, as Gajser excels on hard pack circuits. 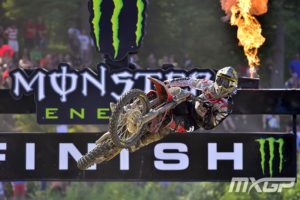 Gajser is going for his first world title and has won four GPs this year. Pic: MXGP

Gajser was less of a surprise package this season after winning motos last year, but he still had to perform with the expectation of being a top three contender. At times Gajser has made some mistake but he has won four GPs this season and was also the first rider to beat Jeffrey Herlings straight up this season. That underlines Gajser’s raw speed and talent plus his impressive self-belief that he could do what no-one else believed possible, and beat Herlings.

While Jonass has a close working relationship with Stefan Everts, Gajser’s strength comes from the bond with his father who has remained heavily involved with Gajser’s career even though he is in a factory team. In fact one of the reasons Gajser went with Honda was the fact they were prepared to allow Tim’s dad to remain fully involved in his son’s racing career.

Both riders are also representing countries not usually associated with top tier world championship success. Latvia and Slovenia are basking in the glory of potentially having a world motocross champion in their sporting history. They are heroes in their country and are having to take that extra pressure on their shoulders every week as they strive to reach their dream.

Another interesting aspect is the manufacturers rivalry. Gajser rode for KTM his entire career until last year when Honda signed him up. Gajser was well known as the next big thing and it was surprising that KTM didn’t get his signature, Honda took the initiative and put a marker down that they mean business and want to take it to the orange brigade. Gajser has since re-signed with Honda for five more years and he is HRC’s big investment and hope to win the MXGP world title in the future.

KTM’s response to losing Gajser was to sign Jonass, who was a big talent in his own right, but illness in his first year of MX2 world championship competition last year perhaps hid Jonass’ true potential. Now we are seeing what he has to offer and you can bet KTM desperately do not want to lose their streak of MX2 world titles to Gajser and Honda, of all people. 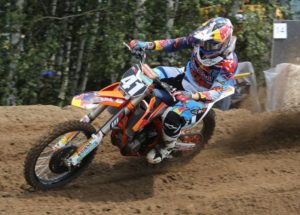 Pauls Jonass will have the red plate at the next round in Mantova. Pic: Nigel McKinstry

So, who will win? KTM have more experience in this position and will have the right people around Jonass to help him through a stressful situation, he knows the team have been here before and that will give him confidence, but Jonass still hasn’t won a GP this season, while Gajser has proven four times he can take victory, that race winning experience could be crucial.

For Honda and Gajser, the championship run-in is all new, but they badly want to beat KTM and establish themselves as the team to beat. Gajser is mentally very strong and he won’t be surprised to be in this position, unlike Jonass, and that may just give him the edge.

But Jonass is a fighter and is one of the toughest riders to pass on the track, he will do what he has to do to get the job done. He and Gajser have already come together this season when Jonass ran over Gajser’s ankle in the first turn in Latvia as he squeezed the Honda man hard going into turn one.

Gajser has struggled with the injury since and won’t forget what happened in a hurry. Neither rider will give an inch in this title fight and it will come down to who can handle the pressure of the championship cauldron.

And if they both crack, Guillod, Tixier and even Anstie could swoop in and steal the title off the two youngsters! It’s going to be a fascinating and tense end to the season to see who can hold their nerve down the stretch.