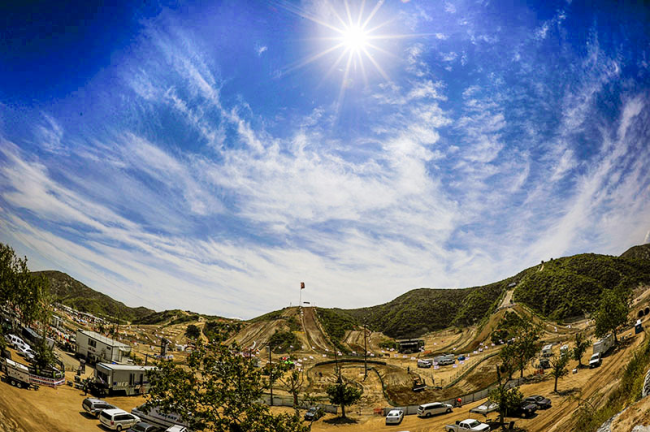 We are well and truly into the final chapter of this captivating season, which has seen some incredible racing over the last seventeen rounds. Both championships were wrapped up last weekend with Honda Gariboldi’s motocross phenomenon Tim Gajser taking the title in the premier class, MXGP, while Red Bull KTM Factory Racing’s Jeffrey Herlings finally got what he deserved, the MX2 title, after two years of horrid luck.

This weekend, the book will be shut on the 2016 FIM Motocross World Championship at one of the most iconic motocross tracks in the world, Glen Helen Raceway. Ask anyone; American or European, and they will tell you that Glen Helen is a beast of a track with some of the gnarliest hills in the world, which obviously makes for monstrous breaking bumps and sharp acceleration bumps.

With yet another solid line-up of riders, which features some prominent American names once again, we’re in for some good racing here at the eighteenth and final round.

The MXGP class is still as unpredictable as it was at the opening round of the FIM Motocross World Championship back in February. But if you are a betting man, you’d be likely to put your money on Monster Energy Kawasaki’s Eli Tomac who was completely untouchable at The Dirt Track last weekend where he waxed everyone in both races to take his first ever grand prix win.

It will be the cherry on top of the cake for Honda Gariboldi’s Tim Gajser if he could claim his first ever win on US soil. The newly crowned champ took to the man-made track at the Charlotte Motor Speedway well, just not as good as Tomac. Nevertheless, this weekend will provide a whole new day, with a track that is at the other end of the spectrum, and without the pressure of winning the championship; it will be interesting to see how he does.

Red Bull KTM Factory Racing’s Antonio Cairoli was off the ball last weekend, but you can’t forget he is still the most successful rider on the line with seventy-seven grand prix wins and eight FIM Motocross World Championship titles. Another thing to keep in mind is that Tony set the fastest lap of the weekend last year at the Monster Energy MXGP of The USA here at Glen Helen.

Monster Energy Yamaha Factory Racing’s Jeremy Van Horebeek was the dark horse last weekend where he looked better than ever out on the man-made track in Charlotte. If Van Horebeek finds his rhythm out on the hills of Glen Helen, he will be a podium threat.

On the topic Monster Energy Yamaha Factory Racing, their recently dethroned champ, Romain Febvre, won the Monster Energy MXGP of The USA last year and will be wanting to finish the season on the box.

Monster Energy Kawasaki Racing Team’s Clement Desalle is that guy you can never ever write off. Desalle hasn’t had the smoothest of seasons but he has finally started to gain some momentum over the last few rounds, and has proved once before that he knows how to lay the smack down here at Glen Helen, as the winner of the US grand prix back in 2011. The Belgian will be hoping to round out the season strong.

Like Van Horebeek, Red Bull KTM Factory Racing’s Glenn Coldenhoff was cooking on gas at the last couple rounds of the FIM Motocross World Championship. The Flying Dutchman was on the podium at his home grand prix in Assen, and was only 1 point shy of repeating that achievement last weekend. He’s hungry, and on the pipe at the moment. Watch that space.

Last weekends Monster Energy MX2 grand prix of Americas winner Yamalube Star Racing Yamaha’s Cooper Webb won’t be lining up this weekend as he has parked his 250cc as of Sunday, and will be jumping on a 450cc as soon as possible to prepare for the Monster Energy FIM Motocross of Nations, and the 2017 season. But never fear, American fans! Geico Honda’s Jeremy Martin will be out to stir the pot in MX2, and will be debuting the red bike.

The champ Red Bull KTM Factory Racing’s Jeffrey Herlings finally has the world title in hand, and come Sunday, you shouldn’t be too surprised if he comes out firing on all cylinders. While Jeff took the title last weekend, it was a bittersweet day because Webb broke his perfect grand prix win rate. The Bullet didn’t seem to beat up by it, and gave full credit to the speed of the Americans, but chances are he will be out with a vengeance this weekend.

Monster Energy Kawasaki’s Austin Forkner is a kid who has made a rapid rise to fame with his mind-blowing results at the last rounds of the US nationals and then his incredible performance at the Monster Energy MXGP of Americas last weekend where he took it to the US champ, Cooper Webb, and the world champ, Jeffrey Herlings. It’s going to be awesome to see him rip around the gnarliest track in the world, Glen Helen.

Team Suzuki World MX2’s Jeremy Seewer is the 2016 MX2 vice world champion. He cannot be caught, while the battle for third between Kemea Yamaha’s Benoit Paturel and Rockstar Energy Husqvarna’s Max Anstie is still wide open with only 12 points separating the two. Currently, Paturel is third, 12 points clear of Anstie. If Anstie manages to get 12 points back on Paturel and the two tie on points, Anstie will take the bronze medal with the system rewarding the rider with the most race wins, which is Anstie who has won four races, and two grand prix wins, while Paturel hasn’t won either.