The contenders: The battle for the British MX2 title is on! 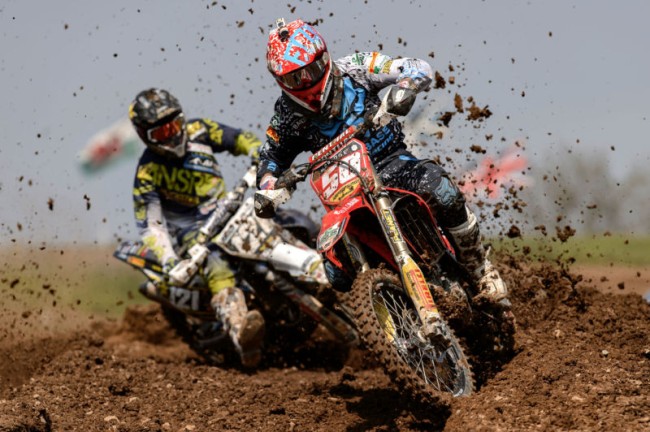 Only fifteen points separate four brilliant riders in an unpredictable and thrilling British MX2 championship in 2016.

With three rounds to go we look at the contenders as they head into round six at Blaxhall this weekend.

1 511 Steven Clarke 182 – Steven Clarke leads the standings and no-one can question the championship leader’s mental strength or championship pedigree. Under huge pressure in the final round of the EMX2 class at Lommel two years ago, Clarke ran with a the sand masters and won the EMX2 title under immense pressure all weekend. One mistake and it was all over but Clarke didn’t make any.

Clarke has the red plate and a lot of determination to win this title. Pic: Martyn Petts

Clarke might not always be the fastest rider on the track but he is never far away and never intimidated, he finds a way to be in the thick of the race, he can step up his pace and won’t let you passed without a fight. He won’t let the red plate leave the Husky easily and will do whatever he can to keep it!

2 50 Martin Barr 175 Martin Barr has established himself as the fastest rider in the class in recent weeks alongside Adam Sterry but a crash and shoulder injury at his home round at Desertmartin, having got the red plate at Hawkstone, means Barr is playing catch-up instead of leading the championship.

Barr though showed incredible mental strength to come back from his Desertmartin disappointment to win a moto at the last round in Leuchars. It sent a signal to the rest of contenders that Barr is in it to win it this year, and when Dave Thorpe says you are “a very, very tough man,” you know you are in the zone and doing something right. Barr is in the form of his life, he has MX2 GP level speed right now, he just needs to stay away from the small mistakes and he could take his first Maxxis British title.

3 121 Bryan MacKenzie 175 Bryan Mackenzie seems to get better with age! His speed is still there and his experience means he makes very few mistakes. That is a pretty good combination and is why the Scot is only seven points behind championship leader, and teammate Steven Clarke.

Mackenzie’s enthusiasm for racing is still strong, he won’t let go of his goal to be British champion and is knocking on the door big time this season. His switch to Husky has gone well, he gets the starts and charges hard at the beginning, gets in his groove and doesn’t let anything disturb his focus. It’s a note of Bryan’s current confidence level that he was disappointed with two third places and his home round in Scotland. He believes he has the stuff to win and he might just do it this season! He knows it might be now or never and won’t want to miss this opportunity.

4 811 Adam Sterry 167 The youngest of quartet and, along with Martin Barr, arguably the fastest guy in the class in recent weeks, Sterry has vaulted himself back into title contention. The youngster has the least pressure of the four, he will have plenty more chances to win a British title and given the fact he missed the first round with a broken wrist, probably wasn’t expecting to win the title this year anyway.

But two overall victories in the last two rounds, including winning three of the last four motos, combined with top ten results at GP level, means Sterry is riding better than he ever has with his confidence level no doubt at an all time high.

Sterry is now only 15 points off the lead but has more momentum than anyone else going into the final three rounds of the series. His starts are usually good, his speed is there so it is just a question of staying away from small incidents but win or lose being in title contention will be great for Sterry’s career as he learns to deal with title pressure. He may need to lean on this if he ever goes for a world title down the line!

Sterry has won three of the last four motos and is not only 15 points off the championship lead Pic: Nigel McKinstry

So who is going to win? It’s almost impossible to predict, on raw speed you have to think Sterry and Barr have the edge but the consistency of the Husky teammates Clarke and MacKenzie is also very impressive, they just never give up.

For me it will come down to who can handle the pressure the best, who can produce their best form and rise to the occasion when it really matters, that is the difference between a top rider and champion. Over the next three rounds we will discover who has the champion’s mentality to win the 2016 British MX2 title.