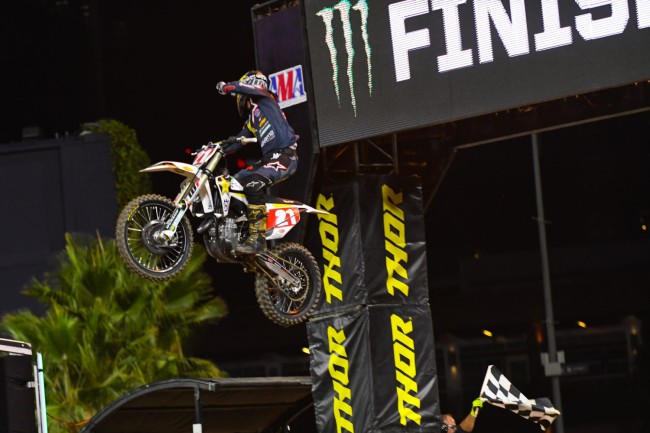 Word was that Jason Anderson didn’t spend as much time as previous years this off-season down in Florida, preferring to stay in California and do most of his work away from the eyes of rival Marvin Musquin.

With defending champ Ryan Dungey retiring, both Musquin ( KTM’s new number one) and Anderson ( Husky’s number one rider) thought 2018 was their time to be champ and they separated themselves slightly despite still getting on, because their didn’t want each other to see their speed secrets.

But things took a turn for the worse a couple of weeks ago when Anderson took Musquin out and Musquin tried to return the favour in their heat race in San Diego – but didn’t make it work. The duo then went 1-2 in the main event with a motivated Musquin hunting Anderson down in the closing stages to have his best ride since injuring his shoulder at round two.

It all made for some tense moments in the press conference between the pair when they were asked about the incident at Oakland.

Anderson remarked: “I think we are just competitive and it comes out on the track. Sometimes we get a little too far ahead of ourselves. In Oakland it was my bad, I was just trying to go forward. Obviously it’s not good between us, it’s hard to put into words.”

While Musquin said: “I was in a good position in Oakland I didn’t not expect or hear Jason at all. I was going off the turn and I couldn’t do anything. Yeah, for sure when you are third in the main and you go down it’s a bummer. We are both racing, I feel like tonight at the end of the whoops I could have sent Jason over the berm but I didn’t, it’s not really my style. One day if I have to I will. The situation (between them) is definitely not the same, we are both fighting for the championship, that’s the way it is.

Anderson then replied with: “Basically he owes me one!”

Whether Musquin will get his revenge this weekend in Texas remains to be seen as the normally mild-mannered Frenchman usually tries to race clean in contrast to Anderson isn’t scared of aggressive racing – but not usually with a training partner!