Team USA riders on being chosen to race the MXoN 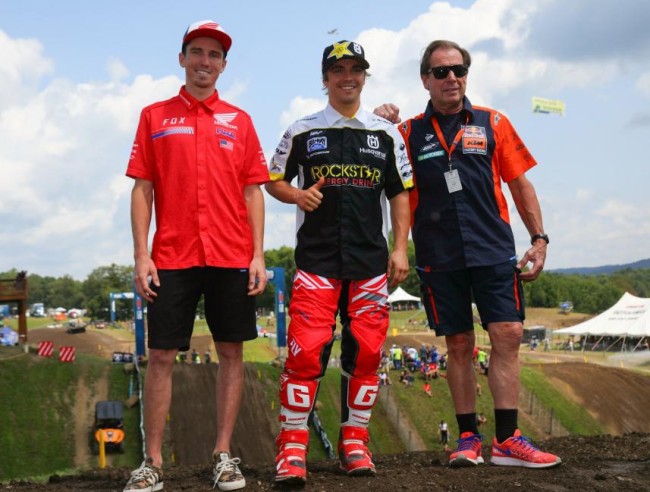 NEW BERLIN, N.Y. (August 12, 2017) – Along with U.S. Team Manager Roger DeCoster, the AMA announced the three-rider lineup for the 2017 FIM Motocross of Nations (MXoN) on Saturday, just prior to the start of the Unadilla National, Round 10 of the Lucas Oil Pro Motocross Championship, sanctioned by AMA Pro Racing.

This year’s lineup will feature a trio of first-time representatives at the MXoN, with Team Honda HRC’s Cole Seely joined by Rockstar Energy Husqvarna Factory Racing riders Zach Osborne and Thomas Covington in their quest to bring the Chamberlain Cup back to U.S. soil for the first time since 2011. The 2017 event will commence from Matterly Basin in Winchester, England, on September 30 – October 1.

“This year’s team is immensely talented,” said AMA Director of Racing Kevin Crowther. “Zach [Osborne], Cole [Seely], and Thomas [Covington] are accomplished riders, who have the aptitude and skill to capture the world championship. And they will, undoubtedly, give every ounce of effort to bring home gold.”

Seely will spearhead the U.S. efforts in the MX1 class, looking to leverage his best season to date in the Lucas Oil Pro Motocross Championship. The California native currently sits fifth in the 450 Class standings and is beginning to hit his stride in the home stretch of the summer, equaling his career-best result at the previous round from Washougal MX Park. He’s looking forward to the challenge of his first MXoN, and leading his country against the world’s best riders.

“I think it is important to have someone who is excited to be on the team,” said Seely. “I’m stoked to make it this year and represent the country.”

In the midst of a breakout season in the Lucas Oil Pro Motocross Championship, Osborne will assume the role of team captain in the MX2 class. The veteran has four overall wins this summer to go along with eight podium results, and boasts a 74-point lead in the 250 Class standings. As he closes in on his first career motocross title, Osborne couldn’t be more excited to become just the second rider in American motocross history to represent his country in both the FIM Motocross of Nations and the FIM International Six Days Enduro, joining former National Champion Mike Brown. While he’s not a first-time participant in the MXoN, having previously raced for Puerto Rico, this will be Osborne’s debut as part of the U.S. effort.

“Being chosen to represent Team USA at the FIM Motocross of Nations has been a huge goal and dream of mine for a very long time,” said Osborne. “I couldn’t be happier to travel to the United Kingdom to race and ride my very best to bring the championship trophy back to the USA.”

Covington’s path in the early portion of his career somewhat mirrors that of Osborne, honing his talents and cutting his teeth against the fierce international contingent in the FIM MXGP the past three seasons. After a breakthrough maiden victory at the GP of Mexico in 2015 Covington has continued to make his presence felt in MX2 and currently sits sixth in the championship standings. He’ll compete in the Open class, looking to take full advantage of his opportunity to represent his country.

“I am truly honored to be picked for the United States’ Motocross of Nations Team,” said Covington. “I am really looking forward to getting to represent my home country overseas.”

AMA Motorcycle Hall of Famer and current Team Red Bull KTM Factory Racing Manager Roger DeCoster will once again oversee the U.S. team as it seeks to end a six-year hiatus and bring home a record 23rd MXoN title. DeCoster was a part of six victorious FIM Motocross of Nations teams in the 1960s and 1970s as part of Team Belgium.

“With Osborne it was obvious, and he has been wanting to go [to the Motocross of Nations] for years,” said DeCoster. “Every year he has asked me, and I have had to turn him down. This year he has earned it. Seely and Covington’s results have picked up and I think it’s a good time for them. All three riders really want to do it and their [respective] teams give them really good support.”

The FIM Motocross of Nations is undoubtedly the most high-profile professional motocross event in the world, and is one of the most prestigious events in all of motorsports. It features three-rider national teams competing for a combined score, to determine the overall championship-winning country. The event emerged in post-war Europe in 1947 and has run uninterrupted since that time.