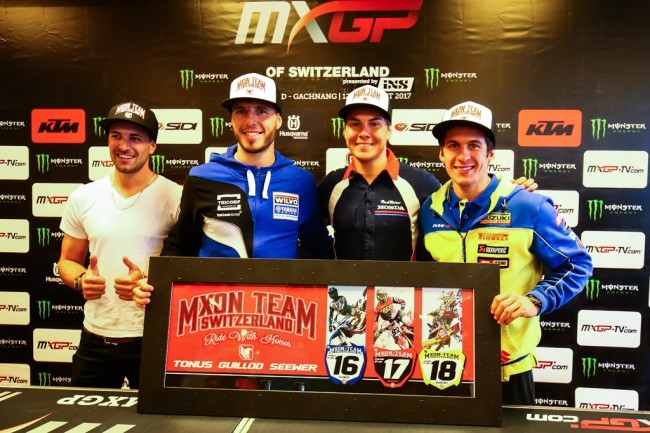 (FRAUENFELD-GACHNANG) Switzerland, 12 August 2017 – Today at the MXGP of Switzerland presented by iXS the Team representing the Swiss country for the 2017 Monster Energy FIM Motocross of Nations was announced.

The group will be led by Wilvo Yamaha MXGP’s Arnaud Tonus in MXGP but the real surprise is that Honda RedMoto Assomotor’s Valentin Guillod will ride MX2 as Suzuki World MXGP’s Jeremy Seewer will race the open class aboard a RM-Z450WS for the first time. Valentin Guillod has proven many times how strong he can be aboard a 250cc machine and as he recovers from his injury he shared his excitement to be back for this MXoN.

Pierrick Paget, the Team Switzerland Marketing and Communication Chief introduced the Team to the National and International Media but first he announced the new management structure of the Team which includes 2 Team Managers: former rider Marc Ristori who is taking care of all sport aspects and Diego Clement as the Official Team manager.