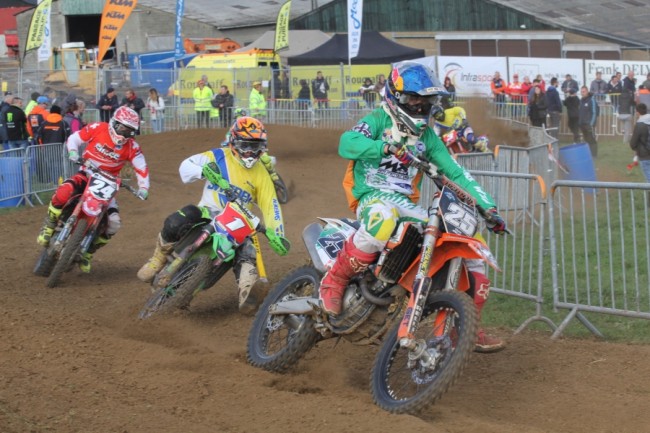 The MCUI’s youth motocross stars were in Belgium for this weekend to
compete in the 46 th Coupe de l’Avenir International Trophee des Nations.
This year a record 14 European countries were represented in the 65cc, 85cc
and Open classes. Practice and qualifying took place on Saturday with
presentation of teams and racing happening on Sunday. The promoters
“Motocross Club Haut-Pays” organized the event as always to the highest
standard. Good weather brought a large spectator attendance resulting in an
atmospheric and action packed weekend full of great racing and great fun too.
Nine Irish riders were selected from the cream of both MCI and MRA youths and
young adults which resulted in a national team with riders from all around
Ireland.

The 65cc class fielded Jake Farrelly, (Meath) Charley Irwin (Antrim) and Fin
Wilson (Cork). The 85cc riders were Ross Kearns (Wicklow), Jake Maunsell
(Carlow) and Aaron Gray (Dublin). Our Open class riders were Jason Meara
(Down) and Jake Sheridan (Dublin) both on 250f machines and Dylan Stynes
(Galway) on a 125cc 2 Stroke. All riders came with mechanics and plenty of
spares, most had spare bikes. The team manager was myself Mick Mc Ginn and
my job was administration and to organize sponsorship. I would like to take this
opportunity to thank the MCI, the MRA, the Club Hauts Pays, CCM and
Mediterannean Design for their generous financial help to the team.

The track at Quiverain in the province of Baiseux, Belgium is used only once a
year and has been built specially for this event. There are 42 start gate positions
and the gate itself is of Grand Prix quality with heavy bars, regulation backstop,
concealed trigger-point and soil takeoff. It is impossible to “jump” the gate here!
Overall the soil is soft loam and has no stones or rocks. The track has been
carved from grassy pasture which has been lightly ploughed to clear the grass
and it is criss-crossed by a dried up ravine which is up to 8 metres deep. Where
the ravine crosses the track, step down and step up jumps have been formed.
Some are gentle slopes with ski jumps on the takeoff , others extreme drop offs
and others 2 stage step ups and step downs. Some of the jumps are so steep that
they are almost impossible to scale by foot.

There is no track comparable to Quiverain in Ireland. This year, the team
prepared for the steepness and technicality of the jumps by training at
Gormanston where the North Dublin Club has built a replica in design (if not
scale) of some of the stepdowns. During the racing, especially in the smaller
classes, it was evident that clearing these jumps was necessary for a good result.
It has to be said that although daunting and a challenge at first, the whole track is
safe the track is open and wide allowing plenty of lines for safety. There is 35
flag marshal positions.

All weekend long the track condition stayed dry and watering was avoided on
the Sunday by plenty of rain on Saturday night.

Saturday was free practice, followed by timed practice, then a race for grid position on Sunday. For all races there were 42 starters. In the 65s Fin Wilson finished 8th , Jake Farrelly 15th and Charley Irwin 26th. This secured 9th place on the grid.

On Sunday the 65 cc riders, Farrelly and Irwin both finished in the mid to late 20s with Fin
Wilson getting a 13 th in the last race and would have finished a couple places higher if he had not have fallen in the second last lap. The 65s improved their position over 2016 from 12th to 10th place in 2017.

The 85cc team had a lot faster pace than last year with the top riders putting in lap times faster than 50 % of the Open riders. Under fierce competition, and with an extra country over last year Team Ireland qualified 13 th and went into Sunday with a mission. Both Gray and Kearns carried out full top end rebuilds overnight and all three were determined to improve on the day’s results. After race 1 , with the three riders riding together from position 29 they were lying in 10th . After race 2 all three had moved up positions by a couple of places and Kearns into 23rd leaving the trio in 9 th place. On the third heat, tiredness and exhaustion took its toll and the team finished the day same as last year in 11th place, which was good considering the increase in pace and competition.

The Open class riders of Meara. Sheridan and Stynes all have had more international
experience and this showed immediately from Saturday. Jake Sheridan had an excellent start in the qualifying race with 3rd out of the first corner with Jason Meara only a few spots behind. Dylan Stynes battling on a Team UK TM 125 against 250 and 450 four strokes was always going to have a job to finish high in the pack. After a great qualifying race they qualified 6th on the grid.

On the first race on Sunday, Jason and Jake raced in the top 10 for most of the race with Jason finishing in 8th , unfortunately Jake washed out on the last lap and finished 25th with Dylan 2 places later. The second race saw a better joint result from all three with Jason and Jake finishing 12th and 14th respectively and Dylan after a fall finishing in 32nd . They were still in 8th place. The third race was intense with Jason and Jake both falling after a blistering start in the top 6 , Jason was surrounded by 3 Swedes all day and Jake being hounded by a Kawasaki 450 for most of the race. Dylan rode like a train on tracks to finish an important 29th . The going at the end was extremely choppy with square edged braking bumps and huge ruts and the team finished bravely with Meara and Sheridan in the mid-teens and an overall 9th . There were only 3 positions over the whole day separating the Irish from the French in 5th place and this goes to show the level of competition.

Overall Team Ireland finished 9th in the Coupe de l”Avenir which is a great result considering the level and pace which most of the riders have been competing at all year. I believe that all 9 riders with their natural talent and determination absolutely deserved their place representing their country. I believe that the all that is standing between Team Ireland and a podium in this event is more experience riding at international level.
I am greatly honoured to have been given the job to manage the team and I have to say it was a pleasure to be around such competitive, good natured and well-mannered atheletes. I applaud their parents and families for the time and support they have given their riders and I also would like to thank the mechanics Piers Waddington,  Michael Woodsworth and
photographer Ian Cairns for the generous support they have given to Team Ireland.