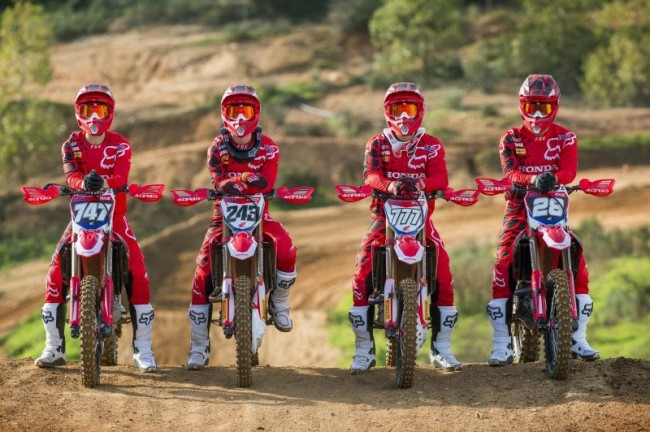 Team HRC put the final touches to their preparation for the 2017 FIM Motocross World Championship assault with the first official pre-season test of 2017 in Sardinia. Having secured a clean sweep of titles in 2016, the reigning World Champions are set for an all-out title defence in what is set to be an MXGP battle royale.

In a change to the 2017, as announced at EICMA last November, Team HRC – MXGP will field World Champion Tim Gajser #243 and Evgeny Bobryshev #777, who will be in his 7th year with Honda, on a pair of factory Honda CRF450RW machines.

The relationship between HRC and Fox Racing has grown this year as Gajser will now join Bobryshev in being head–to–toe in Fox. He will be wearing the newly developed V3 Helmet and Fox air defence goggles which is a first for the brand. HRC MXGP also welcomes Pirelli and Yoshimura to the team as well as continuing its relationship with Motul and Omec for 2017.

The all-new 2017 CRF450RW starts the new season with enviable pedigree – Gajser took its first moto victory at the SMX Riders’ and Manufacturers’ Cup event at the end of last year, and in America new-signing Ken Roczen took early domination in the AMA Supercross series.

The team have been in Sardinia this week riding a variety of tracks and will finish off the week with the first round of the Italian championship in Riola.

The MXGP season kicks off at Losail next month in Qatar on the 24th-25th of February, under the floodlights of the only night race of the year.

My goal this year without question is to defend the title. It is going to be tough to break so many records as I did last year but I am going to ride consistently and have fun as this was how I approached the season last year and it paid off. Honda have also made a big step forward with the bike which is a big advantage for 2017.

Evgeny Bobryshev 777
It feels amazing to be starting my 7th season with Honda. My goal going into every season is always the world title. This year I have changed my fitness programme as we have a long season and I want to be focused and ride my best every weekend. The 2017 CRF450RW has come a long way this year and feeling comfortable on the bike makes me feel confident going into 2017.

Chihiro Notsuka 28
MX2
I am looking forward to riding in the MX2 in the GP’s for the first time. HRC team are very professional and I am confident with their help I will reach my goal of finishing in the top 10.

Michele Cervellin 747
MX2
Riding for HRC is a dream and I love being a part of this big family. My focus this year is to get into the top 5 and hopefully some podiums.