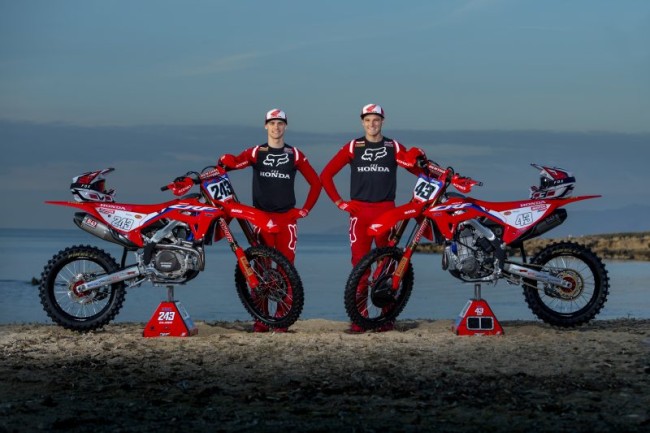 Defending MXGP champion Tim Gajser will once again be leading the way for Team HRC as they look to repeat their efforts and win the 2020 FIM world motocross title. This year he’ll be under the awning with a new team mate as his #243 bike will be lining up next to Mitch Evans’ #43 machine for his first season in the MXGP class, on what is a brand new Honda CRF450RW.

For Gajser, it’ll be a chance to win his fourth world title after successes in 2015, 2016 and 2019 and he’ll be hoping he can replicate the form that saw him win last year’s championship by over 200 points and included a record breaking seven wins in a row for Honda in the middle period of the season. Now though, the focus is on the first round at Matterley Basin which is a track that he enjoys in what will be the first MXGP gate drops for the newest edition of the Honda CRF450RW.

Joining him in what is once again an extremely competitive MXGP class is rookie Evans who moves up from the MX2 world championship which he rode in 2019. Despite being just 21 years old, many experts believe that Evans is much more suited to the more powerful 450cc machines, which is something he proved when he won his first outing on the larger capacity bike at Sugo for the Japanese national championship. Now though, the Australian youngster wants to show that as quickly as possible in the MXGP class as he hopes to settle into this 2020 campaign.

Their machine for the season is a completely new Honda CRF450RW, which has been developed to cope with the multitude of conditions that an MXGP rider has to negotiate during these 20 gruelling rounds of the 2020 FIM world championship. First up though, is the three rounds of the Italian series, before the MXGP opener at Matterley Basin, Great Britain on March 1st.

Tim Gajser 243
I am very excited for the start of this 2020 season. Of course I won the MXGP championship last year but now I will try my best to defend the title, for myself and for Team HRC. We have been working very hard over the off season to get ready for the first round and with this new Honda CRF450RW, we believe we are in a very good position to be able to go out and win races just like I did in 2019. It will be tough as there are a lot of fast riders in the class but I feel as though I am still improving as a rider and knowing that Honda are continually trying to improve my bike is a massive confidence boost too. They did an amazing job on this new machine and I felt good straight away in testing, it really suits my style and I already feel stronger on it than this time last year. It will be a long season with 20 rounds, however I am ready to put in the necessary work and with Matterley Basin being a track I really enjoy, I believe I can start out strongly.

Mitch Evans 43
It was a dream come true to sign with Team HRC at the end of last year, and even though I’ll be riding in a new class on a brand new bike, I feel ready to show everyone what I am capable of. I know it won’t be easy because the MXGP class is filled with top riders, but with the help of everyone in the team I believe I am ready to go out there and get some good results. My off season has gone well and when I jumped on this brand new Honda CRF450RW, I felt good right away. Each time I get on the machine I feel like I am improving and when I’m riding with Tim, I have the perfect gauge to see just how well I am doing. He has been a great team mate so far but I know the results are down to me and that’s what I am concentrating on when the season begins at the

MXGP of Marcus Pereira de Freitas
HRC General Manager – MXGP
We have been working very hard this winter to make sure that Team HRC is ready for the 2020 world motocross championships. We once again line up with Tim Gajser, who is defending his MXGP championship, but then we have a new rider in Mitch Evans and we also have a completely new Honda CRF450RW that we have been developing in order to go racing for this year.
As always Tim has been great to work with, helping with the testing of the new bike and just being a total professional in everything that he does. He gelled with the new machine really quickly and just like last year, he is coming into the new season in a really good frame of mind.
Mitch has also fitted into the team quickly, and has adapted well to riding a 450cc machine after riding in the MX2 class last year. He has good fitness and has shown a lot of promise in the testing sessions that we’ve had so we are all excited to see what he can do in a race environment.
It won’t be easy for either rider but everyone in Team HRC is fully committed to helping them achieve their goals and we are confident that 2020 can be another good year for Honda.Great Britain on March 1st.