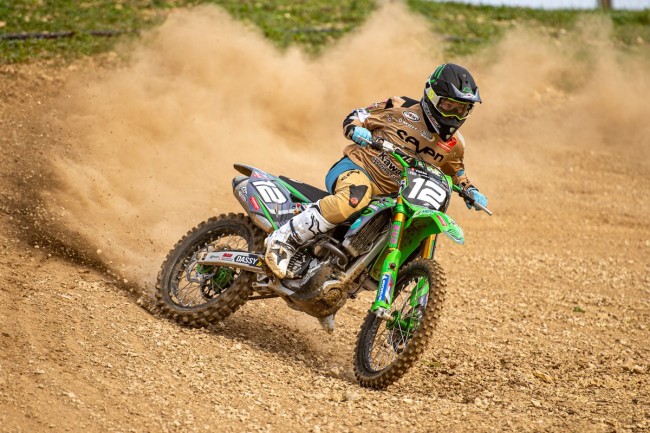 Team BUD Racing Kawasaki will again be behind the World Championship starting gate this season, with four riders in four different classes, continuing their traditional blend of experience and youth.

After a successful return to MX2 GP last year the team has renewed its confidence in Mitchell Harrison as the youthful American starts his second season in Europe. Last year he had to learn both new tracks and European motocross in general after his previous career in the USA and he will line up at Matterley Basin – first of the 20 GPs on March 1st – with more experience. At selected GPs he will be joined by Pierre Goupillon, back with the team after a first collaboration in 2018; the main goal of the young French rider will be the European EMX250 Championship. Both will of course contest the French Elite series and will be in Castelnau de Levis mid-March for the opening round.

Belgian Amandine Verstappen, the reigning French women’s champion. Is a newcomer to the team. Amandine will race her KX250 Kawasaki for the first time in Great Britain at the opening round of the WMX world series. Having recorded her maiden GP victory last year she will also defend the French Championship.

In the long tradition of Marvin Musquin, Dylan Ferrandis and Brian Moreau, who each started their careers with BUD, it’s now Quentin Prugnières that the team has signed on a long-term deal. The French Hopefuls champion last year, the youngster from the island of la Reunion will contest the French Junior and European 125 championships.
All this investment would not be possible without the team’s loyal partners, especially Kawasaki who has backed the team since 2007! Alongside their long-term sponsors BUD is proud to welcome new partners Champion lubricants, PROX and Boomerang.

2020 also saw the return of Thierry Van Den Bosch as trainer of all the riders; the multiple Supermoto world champion is back in motocross after a successful experience in road racing. “I’ve been working with Pierre Goupillon since November and everything is going well; we knew each other already as I had worked with him previously in the French national team and we have been working together intensely for two weeks each month. Mitchell arrived in Europe two weeks ago; he had to rest before coming back to Europe due to a minor injury but now we start our racing programme this weekend as he and Pierre will race at Ottobiano in Italy. We’ll stay in Italy to race Mantova one week later and Quentin will join us there too. Then we’ll have three more weeks to prepare for the first GP in Matterley Basin where our four musketeers will all be on track as the MX2, EMX125 and WMX championships each kick off there.”