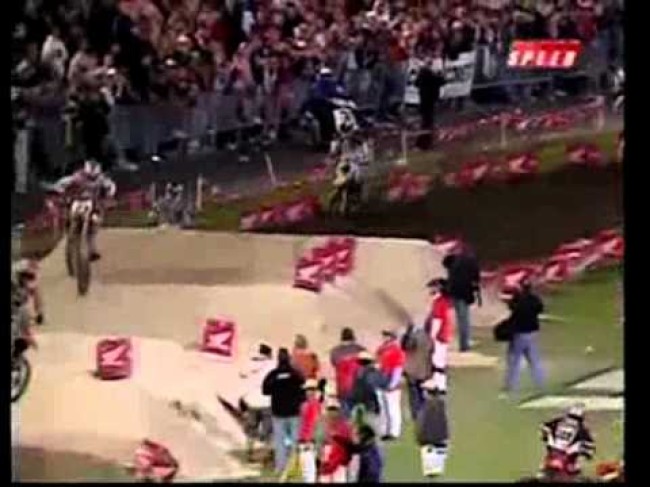 With Talavera this weekend we look back 15 years to Gordon Crockard’s first ever GP win. The Northern Irishman went on to win three more GPs in his career and finished third in the world in 2002. But after winning his first GP he described it as, “a piece of cake!”

The Ulsterman shocked the world that day as he had finished 13th in the championship the year before then left the first round in 2000 leading the  championship! Crockard would go on to finish a credible sixth in the championship and was one of the most sought after riders for the 2002 season.  Fred Bolley won his second world title that year year after a brilliant battle with Pichon.

The amiable Crockard reflected on that memorable achievement by saying:  “Amazingly I went to the first GP of Talavera thinking I might not qualify and was prepared for that blow because I hadn’t qualified in ’98 or ’99. So I was thinking this could happen again and don’t worry.

“So I qualified in 23rd and it was a big relief. Then I holehot the first race and won it! It was remarkable, I had no idea that I could do that.

“I got the start and was wondering how far back I was going to drop I just thought, ‘go, go, go!’ It felt like I was practicing, it really did because I had done so much practice, a serious amount of practicing and it was practice with a purpose. The whole time I was practicing I had a goal to be British champion, I knew it was an opportunity I couldn’t let go and that’s what was driving me.

“It was dead funny at Talevera because I just kept seeing the gap getting bigger and bigger on the board and I was thinking. ‘what is wrong with these guys? Why are they going so slow?!’

“I wore the same goggles in race two, back then we had roll-offs because you didn’t have laminate tear-offs because back then if you put on six it was like looking through a milk bottle! I had roll offs with two tear –offs and I just set them in the sun to dry for the second race and I think that’s the best part of that story because I hate doing goggles!

“But it was a massive surprise I didn’t feel like I did anything special. I rode the second race much better, I ended up fourth but I didn’t get a good start and also got my leg caught in the back wheel but kept going and kept going and that gave me the overall so I was leading the world championship and it was bizarre.

I came away from it but my attitude didn’t really change, I thought that wasn’t going to happen every weekend, just take that as a bonus because it’s not going to be that easy.  But it gave me an insight into what it’s like to be a top world racer because the phone rang off the hook with potential sponsors. You just get spoilt.”