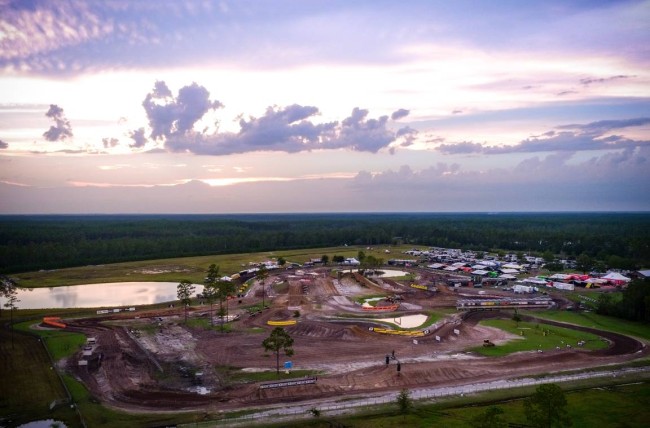 Jonathan McCready: There is no doubt Eli Tomac will have revenge on his mind after Jeffrey Herlings overshadowed the American’s title triumph of his national championship. Now, with nothing to lose, Tomac will be racing as hard as he ever has, maybe even harder, in order to win this USGP against the GP regulars. He will have all of American racing urging on him to win.

But Jeffrey Herlings has already said he wants to make it 2-0 to him against Tomac this weekend and he has the momentum on his side, Tomac will have to find 1-2 seconds a lap in order to run with the Dutchman if last week is anything to go by. But don’t could out Antonio Cairoli. The Italian won’t like being overshadowed with the Herlings hype this week in America and he has the chance to win the title – if he goes for it and beats Herlings.

Tim Gajser and Romain Febvre are on form and ready to do battle and don’t count out Arminas Jasikonis who has some fantastic raw speed in the sand or Cooper Webb who will be making his debut on the new 2018 Yamaha – and even Shaun Simpson if the rains come as predicted, as well as the consistent Gautier Paulin and Clement Desalle or the rapid Max Anstie.

The heat gives Tomac the advantage but if Herlings can handle the humidity I think he wins the overall from Cairoli with Tomac third, the American might win a moto but could also have a tip over or poor start that wrecks his chances of the overall win.

In MX2 I think Adam Cianciarulo will be hard to beat, he has the confidence, is the hometown boy and knows the Florida soil, plus if as rumoured,the US guys will be running their own fuel then that gives them a big advantage over the GP regulars in this class. But if Jonass gets the starts he should be pretty close – Jorge Prado and Hunter Lawrence should surprise the Americans with their speed, Seewer won’t be far away if he gets the starts, while Husky duo Thomas Covington and Thomas Kjer Olsen should also be knocking on the door for a podium, Covington might even sneak in a moto win!

Joey Savatgy would usually be a contender but has been injured so his fitness status puts a question mark next to the normally very fast American.

Andy McKinstry: “It’s the USA GP this weekend and I can’t wait! The event is setup perfectly, Tim Gajser got back to winning ways in Sweden so will be heading to America feeling good. Also, Romain Febvre won a moto in Sweden and will feel like he should have won the overall but for a small crash in the first moto so he’s also feeling good at the moment.

Herlings confidence right now must be sky high after coming from last to first in the second moto at the AMA National at Ironman, what a statement that was! Eli Tomac won’t have any championship pressure and will be out to prove a point, don’t be surprised to see him on top of the box this weekend.

The man everyone seems to be forgetting about is Antonio Cairoli, will he play it safe with a championship on the line or will he go for it? If he gets good starts I think he’ll want to prove a point so don’t be surprised to see him right at the front.

However, who wins? It’s tough to call but after Herlings stunned America at the weekend I’m going for him to win again this weekend. He’s the man at the moment but don’t rule out any of the other big four I’ve mentioned.

In the MX2 World Championship I think it’s going to be hard for any of the GP guys to stop Adam Cianciarulo. It’s going to be hard to stop him in his own back yard but of course Jeremy Seewer and Pauls Jonass are more than capable of running his pace.

Two guys to look out for are Jorge Prado and Hunter Lawrence. It was only last year they were competing in the EMX250 championship but they are fast learners and can hold their own in the MX2 class. Prado certainly hasn’t got any problems getting out of the gate so he could find himself leading on the first few laps!

Thomas Covington for me is one of the most improved riders in the class this year, he’s a podium contender at pretty much every track on the calendar now. He’ll be excited for his home Grand Prix so will be fast but I’m going with Adam Cianciarulo for the win”.

Paul McCready: “Well this is set up nicely! Herlings dominated the last USA national so is full of confidence, Tomac wants revenge, Gajser and Febvre have suddenly come back to form and want to prove why they are former world champions, and then that guy most of the press aren’t talking about but can win the MXGP championship this weekend.

For me I think Eli Tomac might just edge it as he has the motivational carrot in front of him, metaphorically speaking and maybe quite literally after last week in the way of that orange KTM of Herlings. His pride, AMA motocross pride, America’s pride, Donald Trumps pride is all on the line. Eli wants to make America great again. However a word of warning for Eli, starting outside of the top ten isn’t going to cut it in MXGP.

That is were Cairoli comes into his own. It seems like Cairoli has holeshoted most of the races this year, 14 of them if my memory doesn’t fail me. However is has just been Cairoli’s starts that have impressed this year, he has shown speed to match anyone any time, until the last two races where he went into his wily championship mode. If Tony gets a start I think he will push for the win so he can wrap this championship up two rounds early, if not he will be happy to wait untill Assen next week.

Tim Gajser and Romain Febvre have hit form in the nick of time. After a disappointing season for both, they finally have rebuilt themselves and are now a very big threat each and every race. Two World Champions with a point to prove will be in the mood to spoil the Herlings & Tomac show.

That bring us to the man of the week, Jeffrey Herlings. What a week and even when celebrating his victory immediately after the race he said he wanted to beat Tomac again this weekend. The DNF in Sweden really pissed the dutch man off, he wants to unleash his speed an anger on the rest of the field once again.

Five champions aiming for one position and it isn’t 2nd place. Only a little on line then!

Let’s hope the weather holds up because this is set to be a barnstormer.”