Talking point: Who should America pick for the MXDN? 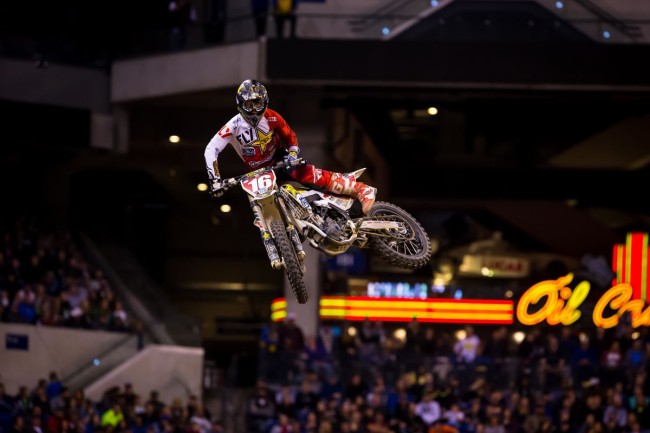 Jonathan McCready: America have been dealt a bit of a bow with Eli Tomac, Blake Baggett and Jason Anderson all pulling out of the event for various reasons but fortunately for the biggest motocross country in the world they have a lot of top riders to choose from!

While their 450 class is not the deepest, with maybe only Barcia and Webb solid choices, they have a several excellent 250 riders they could bump up to a 450.

Zach Osborne is likely to be the 2017 250 National champ and he has MXGP experience and raced at Matterley before so he should be a shoe-in plus he can ride a 450 or a 250. They could also put Jeremy Martin on a 450, the two-time 250 US champ showed that he is good on the big bike with a second at Daytona and is currently second in the 250 series. That means the USA could still send 1-2 of their national championships.

They also have the proven option of Cooper Webb – on either bike. He has raced a 450 for the last two years at the event and although his AMA form has been patchy he was back in top five contention before a small knee injury, and will reportedly ride the 2018 Yamaha for the rest of the season if the AMA allow him – something that could bring him back to the front of the field. Webb always rides well at the nations and if selected he will be a contender.

Then there is the wildcard option that has already been overlooked, Thomas Covington. Covington has raced at Matterley Basin before, won GPs and is currently in great form in MX2. His factory Husqvarna team are already in place in Europe and will not provide a travelling headache.

A team of Martin, Osborne on a 450 (already raced a 450 at the MXDN for Puerto Rico) plus Covington on a 250 would give the USA three riders who have won races at the highest level this year. Unfortunately for team USA, Covington will now be competing against his countrymen as the MX2 rider for Puerto Rico!

So, taking all things into consideration I would pick:

A team of AMA champions that are more than capable of winning the 2017 MXDN!

Andy McKinstry: “It’s been a bad week for team America as for two very different reasons Eli Tomac and Jason Anderson won’t be taking part at this year’s event. They both join Blake Baggett in watching the event from home!

So, who will get the nod for team America? One rider for sure that will get picked is Zach Osborne, most people are assuming he will race in the MX2 class but I’d personally put him on the 450. It’s likely Osborne will race in the MXGP class at the USA GP so he will get plenty of bike time in on it.

Before it was revealed that Jason Anderson was out for the event I would have put Cooper Webb in the MX2 class. He hasn’t been sensational during his 450 rookie season as he sits tenth in the series. However, with Anderson being out that changes things and because of that I’d choose Webb on the 450, hopefully he can find good settings on the 2018 Yamaha and start improving. Also, Webb has took part in the event before so knows exactly what to expect.

That leaves the MX2 spot, Jeremy Martin gets the nod for me. The Geico Honda rider sits second in the series and has been Osborne’s main challenger. As much as I’d like Webb in the MX2 class it wouldn’t make a great deal of sense for both Martin and Osborne to ride the bigger bike after riding the 250 class all season.

This team might not go into the event as clear favourites as usual but it’s certainly still more than capable of winning!

Paul McCready: The Americans are falling like flies. Between injuries and a certain rider refusing to represent his country in the biggest motocross event on the planet, team USA is having a tough time getting their best riders to race.

As the others have said the only American 450 riders that have the speed to run with Herlings and Cairoli are out so that leaves slim pickings in a rather depleted US 450 National championship. Webb and Barcia have proven MXDN experience, but both riders have had terrible years and are currently injured, though should be fit for the Nations. The only other rider who I can see getting a decent result is Seely, but his big performances have come in SX rather than MX.

That then leaves bumping up the some 250 riders to the big bikes, which USA has had success doing before, remember Dungey in 2009! Zach would be my choice to ride the 450 as he has ridden the mxdn on one before and has plenty of experience of the Matterly Basin track.

I’m a little worried about Jeremy Martins form over the past few rounds. He has worryingly tailed off like last year and hasn’t had the consistency he once did. If Alex Martin is back healthy I think I may pick him over his younger brother.

However, I keep coming back to the idea of Copper Webb on the 250. Has everyone forgotten how good he was on that thing? Give Coop back his beloved 250 from last year and his confidence will come rushing back. Covington is another strong option but they historically don’t pick a rider that isn’t racing in USA.