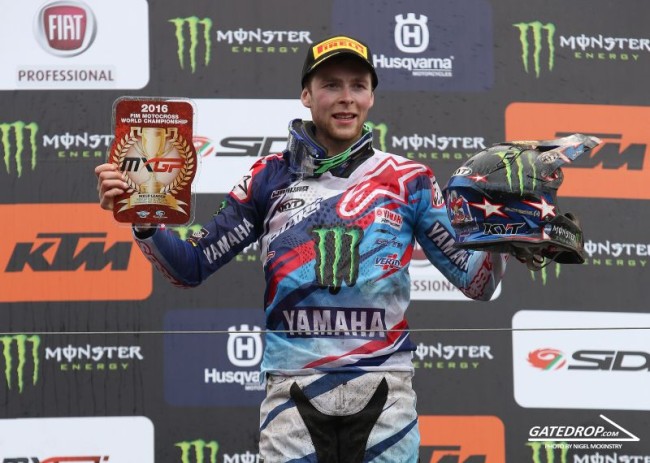 It might just have been the best win in Romain Febvre’s career.

In front of a huge crowd, on a rough sand track in the epicentre of Grand Prix motocross, the showdown was on in a gripping final moto of the weekend, and it was Febvre who delivered.

It was the 2015 world champ versus the 2014 world champ, both believing they are the king of MXGP, both desperate to win and prove to each other who is the real alpha male of world motocross.

With just two laps to go, Antonio Cairoli led by just over two seconds and was about to get some seriously important momentum, but Febvre said no, he pulled the pin, passed his teammate then reeled in Cairoli and remarkably passed the Italian on the last lap to take an incredible victory!

It brought back memories of the McGrath/Carmichael rivalry in early 2001 and a phenomenal come-from-behind victory by Carmichael over race-long leader McGrath in the Californian’s backyard at Anaheim. Back then American motocross aficionado Davey Coombs said after Carmichael’s epic victory, “I think something just changed.”

DC was right, McGrath never won again and Carmichael took over as the supercross king for the next six years. The torch had been passed and that race was the game-changer. McGrath had experienced the same switch of momentum in his favour back in 1993 when he passed reigning champ Jeff Stanton to win his first ever 250 supercross. The sport was never the same again as McGrath took it too dizzying heights before he was dethroned by Carmichael ironically at the same location eight years later.

On Sunday at Valkenswaard when Febvre made that pass in what was effectively Cairoli’s backyard to take the win, the feeling was eerily similar to that night at Anaheim in 2001.

This was HUGE and Febvre’s flamboyant celebrations over the finish line jump told the world just how big this victory was to the Frenchman. This wasn’t just a race win Febvre was celebrating, this was beating Cairoli in his backyard and coming from behind to do it in a dramatic last-lap where both riders knew that there was much more on the line than a simple 25 points at stake. This was a statement and Febvre was ecstatic.

Because of Cairoli’s injury last year it never felt like Febvre and Cairoli really got to battle for supremacy in MXGP. Now one year on, it’s happening and they both know it.

Cairoli’s post race comments were equally revealing, the usually positive Italian admitted: “For sure I am really disappointed because I led the last race for all the laps and I got passed in the last part of the final lap. That’s not the best way to end the moto but already 2-3 laps before I was tired and I knew my condition is still not so good at the moment.”

The final sentence is Cairoli’s chink of light however, he still thinks he can beat Febvre and win this title but he knows now it’s going to be the toughest championship of his career – Cairoli is already 37 points down after only three rounds.

This was a big mental blow to the Italian but it will only be later in the year, with the benefit of hindsight, will we really be able to decide if that pass was the knock-out blow or serve as a red-rag to a (red) bull, but as of right now it was certainly a big statement by Romain Febvre.

Argentina is now vital for Cairoli, he’s a fighter, he’s unbelievably talented, he’s proud and he hates losing but he is under big pressure to turn this around. That’s two straight-up battles for the win with Febvre this season so far and he has lost both. Cairoli has never raced anyone for the title with this much momentum, ruthlessness and self- belief.

Febvre is on a mission to silence the doubters. Cairoli has to hit back in Argentina and he knows it, he needs to reply with a statement of his own and do it quickly or we may be witnessing the end of an era.