Talking point: The most important off-season ever for MXGP contenders? 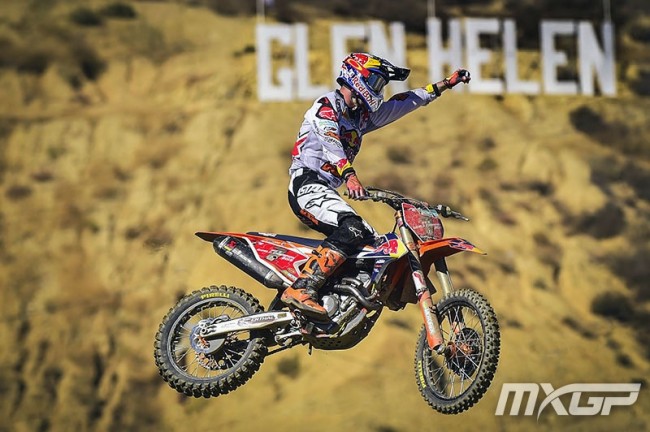 “I will train as I have never trained before.”

The words of eight-time world champion and 20106 MXGP runner-up Antonio Cairoli in a brilliant interview with Motocross action magazine. And he won’t be the only one.

Rider motivation is at an all-time high in MXGP.

We all thought that when Ryan Villopoto entered the series that would be the biggest winter for everyone who wanted to win the title. But really that was the warm-up for what is to come in 2017 – Jeffrey Herlings. Ryan Villopoto was the man in the USA but he was just one of the boys in MXGP as he tried to learn a new way of racing on a variety of different tracks outside the comfort of one dimensional circuits and the one day racing format of his homeland.

This time it’s different. With only a couple of weeks on the 450 bike, Herlings has already beaten Cairoli, Febvre, Gajser and even supercross champ Ryan Dungey. Crucially he knows the tracks, is used to racing in different countries and has won just about everywhere and on every surface. And all his competition know full well the level will be lifted again.

Cooper Webb who beat Herlings one time out of three at the end of 2016 said that one moto was the best race of his life. Arnaud Tonus, who will make his MXGP debut next season on the Wilvo Yamaha, said in an interview on MXlarge, “When you ride with Herlings, and you are on that type of speed, everything clicking, and it’s really hard to be consistently on his speed. Sometimes you can reach it, and you are there, but it’s hard every weekend.”

This is why this winter is so important, the riders that can challenge and potentially beat Herlings know they have to bring their A* game – even reigning champion Tim Gajser.

Cairoli after two years of injuries interrupting his winter preparation is finally healthy as he prepares to take-on the man who is essentially the star rider coming up to replace Cairoli at KTM for the next few years. But Cairoli won’t be going away that easily, he has two years left and quite rightly firmly believes his speed and experience is enough to win a ninth world title – but his comments indicate he knows exactly how tough next season will be, the young generation is here and Cairoli will have to work harder than he ever has. It will be Cairoli’s greatest ever title if he wins it next year.

Tim Gajser is on the crest of wave with two titles in a row and winning the MXGP title in his rookie year, the one box left to tick before America is beating Herlings to a title. Gajser won the MX2 title after Herlings got hurt with a huge points’ lead, but Herlings was faster. With Gajser moving up last year he didn’t defend his title against Herlings in MX2 so now the fans finally see the battle we want, Gajser v Herlings – the two 2016 champs finally going head-to-head on the 450s. Armed with a new bike from Honda, Gajser knows he needs to step up again next season and prove he can beat the guy many believe is the fastest man on the planet.

Romain Febvre goes into the season angry at 2016, he has his old mechanic back and will believe he has the speed to win the title. He had Gajser’s speed in 2016 but he didn’t have the starts to go with it, he knows he needs to be the full package next year. You aren’t going to win the title starting tenth every week when Herlings/Gajser/Cairoli are out front. He, like Gajser, will want to show he can beat Herlings on the big bike and he will want some revenge on Gajser too!

The man they are all preparing for is Herlings and he has already began his 2017 preparation. He wants to dominate, he says he can’t wait for the season to start but knows the competition will be doing all they can to beat him. Herlings is a bit like marmite, some love him and some appear to hate him but that is only spurring him on even more to prove the haters wrong.

He handled Febvre and Gajser in the MX2 class with no problem but there is no doubt they stepped up a level since jumping on the 450 machine – but are they on Herlings’ level yet? Herlings knows Cairoli won’t want to play second fiddle at KTM and he knows Gajser and Febvre want to prove they can beat him.

Herlings is going into next year with a target on his back. This is what the world has been waiting for, Herlings in MXGP and everyone is desperate to take away the limelight from the Dutchman in 2017.

But they all know the foundation for their victory starts now, far away from the glitz and glamour of race wins, adoring fans and victorious national anthems.

It’s youth v experience next season and everyone is preparing for the biggest fight of their life. But who will get their preparation right and deliver the knock-out punch?