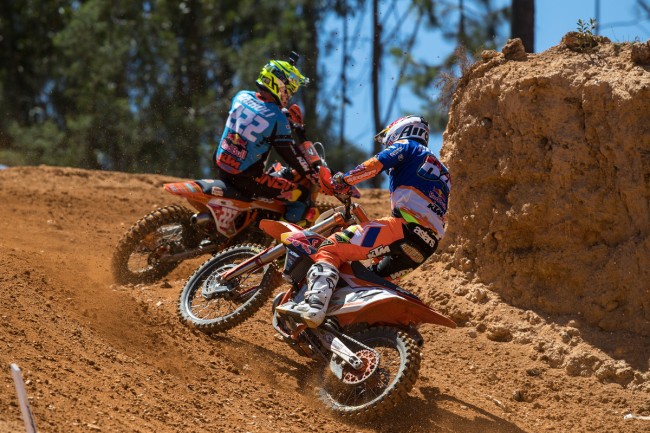 It has been a fascinating last couple of weeks in both the MXGP world championship and the 450 AMA national championship as the two fastest riders of both series go head-to-head.

In MXGP the long-awaited duel between Cairoli and Herlings has finally happened and we saw it for two weeks in a row! We all know that Herlings suffered heat stroke in Ottobiano but he did show the same level of speed as Cairoli.

However last week in Portgual we saw a resurgent Herlings, who this time not only ran Cairoli down but was able to make the pass and this time hang on for the win. But it was more than that, Herlings took some criticism for his lack of fitness one week prior in Ottobiano but it turned out, as we reported here last week, that Herlings was ill. That combined with the heat and tough track sapped Herlings of all his energy and ended with him passing out at the end of the final moto of the day.

Just one week later Herlings, was a feeling a bit better and proved his point by passing Cairoli and holding him off despite a late race surge by the championship leader. And that’s where the mind games came in, Cairoli is known for his late race charges, and with Herlings struggling in the heat the week before, Cairoli really put a charge on in the last five minutes, not only to try and win the race, but it meant Herlings couldn’t relax, asking him the fitness questions and draining more energy out of the Dutchman for moto two.

In moto two Herlings gated fifth but Cairoli was straight into the lead, Herlings charged into second about five seconds down but then lost time and ended up eight seconds down on Cairoli. But it wasn’t over, Herlings then decided to put a late-race charge of his own against Cairoli. That did two things, first it showed Herlings’ had the fitness but it was also a signal to Cairoli that he could put the late race charge on the Italian just like Cairoli had done to him in the first moto!

Don’t forget in Italy after Cairoli brake-checked Herlings in race one, Herlings came back and passed Cairoli in that exact place in race two with a brake-check.

Cairoli is using his experience but Herlings is learning from Cairoli’s tactics and then using them against the Italian. It is absorbing to watch the battle between the two alpha males finally battling for supremacy on the track if not in the championship due to Herlings early season injury.

So far Cairoli has edged the battles, his experience combined with his speed is getting him through, but Herlings is learning fast, and every mental game Cairoi has played so far Herlings has reciprocated.

The fact they are teammates means it is an extra fine line to walk for the pair.Both have undoubtedly got huge admiration for each other, but the simple fact is they both want to be number one. Both think they are the best in the world yet are both are at completely different stages of their careers while simultaneously vying for the same goal.

We saw the edge between the pair with Cairoli’s pass on Herlings in Ottobiano when he took him to the berm and Herlings’ comments in an MX Large interview about wanting “revenge” for that defeat in Lommel, it shows that there is a certain friction there between the prince and the King but both are handling the duel well publicly.

How it will pan out, especially between both sides of the KTM awning as well as the riders themselves, will prove to be riveting viewing for the rest of the this season and especially if the title is between them next season.

This might just be the beginning of one of the great rivalries of the sport.

Herlings’ pass on Cairoli in Portugal:

The battle in Italy: