Talking point: The first motocross race of the year! 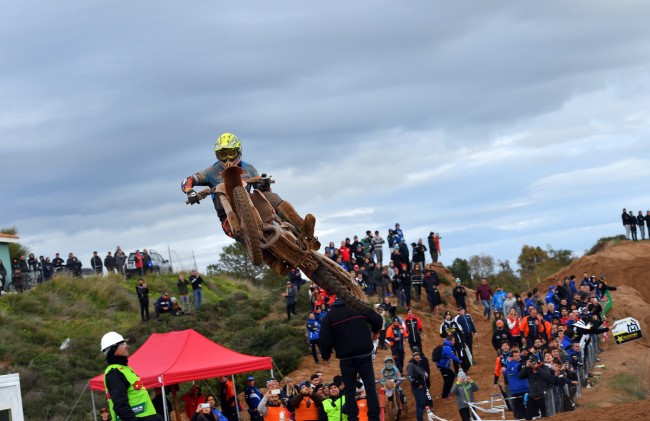 Andy McKinstry: That’s the motocross season back up and underway, finally! Just how good was Antonio Cairoli at the weekend? He looks as good as ever and has clearly been putting in the usual hard work over the winter. He wants that tenth world title to break even with Stefan Everts and he’s going to be tough to beat, he has the consistency at the speed.

Last year, the first round of the International Italian series was a disaster for Herlings as he picked up an injury and this year he didn’t get a full lap in as he went down in the first corner and got ran over. Thankfully he’s okay though and he will be looking to win at Hawkstone this weekend.

Brit, Max Anstie looks superb now he has his rookie year in the MXGP World Championship behind him. He went 2-2 behind Cairoli and was in the best place position to learn plenty from the nine times world champ. Anstie ended his season in style at the Motocross Des Nations and will be hoping to be strong at Argentina this year, with the way he’s going there’s no reason why he can’t be a regular for top five and podium results.

Another rider that showed good speed but not the results to go with it was Jeremy Seewer. His starts are a big problem and he needs to get them sorted, they cost him a world championship last year and it could cost him good results this year. If he irons them out though he could be dangerous as a rookie with no pressure!

In terms of who didn’t have a great first race, you’d say Jasikonis was solid but we’ve been used to seeing him closer to the front in the sand on the Suzuki. Also, it looks like Max Nagl has a lot of work to get the TM up to his liking. He also picked up a small injury which means he’ll be off the bike for a few weeks – valuable testing time!

As for the MX2 class, it’s not a surprise to see Jonass’ and Lawrence speed. They could prove to be the main men once the season gets underway. Lawrence is still waiting for his Geico engines so just think how fast he’ll be when they arrive – the same for his team mate, Vaessen who was impressive in the superfinal ending up the second MX2 rider.

The rider that impressed me the most was Maxime Renaux, he is really talented and I think people forget just how good he is. However, after being out for nearly a full two seasons it can be hard to come back but he was one of the fastest MX2 riders at the weekend and with that speed will challenge for the EMX250 Championship.

Calvin Vlaanderen already looks really comfortable on the HRC Honda, since moving up to the MX2 World Championship he hasn’t really been able to put a full season together if though he’s showed speed so hopefully 2018 can be the year he puts it all together.

Ben Watson should have had a fourth in the MX2 moto until a technical problem with the bike which is a shame but the speed is good. Another rider that looks good is Roan Van de Moosdijk, he’s another talented kid so keep your eyes peeled out for him in the EMX250 series this season.

Jonathan McCready: It’s always good to get the motocross season back. As good as supercross is, it’s hard to beat the great outdoors and the rough circuits.

Tony Cairoli again stole the headlines in Italy. After his first moto domination it looked like he didn’t even break sweat. Then In moto two Cairoli seemed to allow Anstie and Febvre by, but then he upped the pace, passed Febvre back aggressively caught and passed Anstie and cleared off for the win. It was a statement to the rest of the field that one year older, Cairoli is still on the top of his game and as motivated as ever.

In contrast it was a bit of a disaster again for Jeffrey Herlings after he crashed on turn one, but thankfully he is uninjured and able to ride this upcoming weekend in Hawkstone Park. Tim Gajser reportedly got stuck in Slovenia due to snow meaning that two of the big three couldn’t show what they really had.

But Max Anstie could, and he was impressive again. Second place on the day and getting to lead some laps was the perfect way to start for the Brit who might be ready to really become a leading contender this season.

Romain Febvre also impressed on the 2018 Yamaha. Febvre admitted he feels much better on the new bike and, as sand is his toughest surface, the Frenchman showed good speed in comparison to his rivals – and he was not happy with Cairoli’s pass on him in the second moto, so keep an eye on those two in the beginning of the season!

Max Nagl’s move to TM didn’t start out too well with a cracked bone and not showing great pace. But the season is long so it will be interesting to see if Nagl can adapt and find the pace he is looking for when MXGP starts.

In MX2 Hunter Lawrence and Pauls Jonass stood out. Lawrence wasn’t even riding his full race bike and took the win while Jonass came back from a big crash to catch Lawrence before settling for second. Both riders look ready to go for the tile.

Ben Watson showed tremendous form on the Kemea Yamaha until a mechanical forced him out. Calvin Vlaanderen , who led some laps, showed what he could do too in what was a good day for Honda and their new MX2 machine.