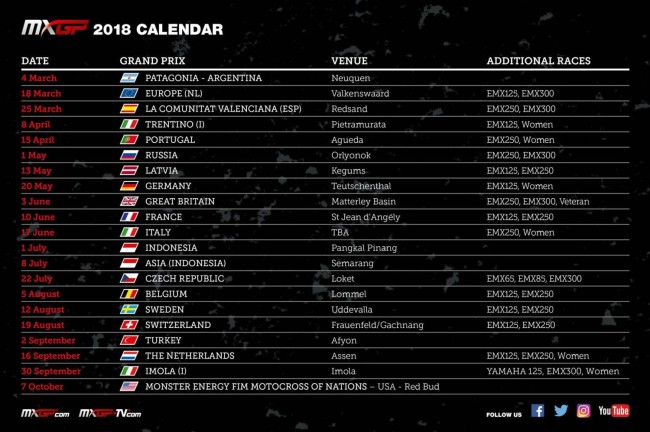 Jonathan McCready: The calendar is long but for fans I think it is great. It gives the riders and teams 20 weekend’s a year of exposure helping build their profile around the world.

Of course for teams and budgets it is tough and maybe 18 rounds would be a better compromise, but to see the best motocross riders in the world 20 times a year is great for those that just enjoy watching the battles.

As far as the overseas races go, it would be nice to see countries like NZ and Australia get rounds, established countries with good motocross heritage and no USA GP is not ideal either.

But all in all it is a very good calendar. The decision to start in Argentina is great and a real fitting start to the MXGP series, it is an awesome track with some awesome fans ready to kick-start the series into life. For me that first round could be really the highlight of the new calendar with the excitement from riders and fans for the circuit and the beginning of the championship. It could become the A1 of the world motocross championship!

As long as the traditional tracks stay I don’t mind the odd man-made circuit like Assen or Imola. It brings new fans to the sport and right now the championship has a bit of everything, natural tracks, man-made tracks, hard-pack, sand as well as adapting to all the different countries and cultures. You really need to be the complete rider to win the world championship, and that is what it is really all about – so in that context the calendar really delivers in 2018.

Andy McKinstry: “So, Youthstream have recently announced the calendar for the 2018 season. With twenty rounds scheduled it’s going to be a long season! As far as I’m concerned, the more the merrier so I’m good with twenty rounds.

There’s less fly away Grand Prix’s on the calendar next year with only three which is an improvement, three fly away’s is a good amount. I don’t think anyone can argue about Argentina, it’s a superb GP. With regards to Indonesia whether you like it or not, it’s a huge market and the manufacturers want to go there so that’s worth mentioning. However, perhaps one round there would have been enough.

Qatar is off the calendar for 2018, that place is a bit like marmite in the sense people either seem to love it or hate it. Honestly, I enjoyed having it around and it made the first round really interesting being a night race.

There were whispers around the paddock this year that Assen might not be around for 2018 but personally I was relieved to see it back on the calendar. That place is awesome and I can’t wait to go there again next year.

Just like usual the calendar offers plenty of variety, the world champions aren’t going to be just one trick ponies. With plenty of hard pack tracks such as Matterley Basin, Loket, Uddevalla and Teutschenthal to name just a few. Then the sand tracks like Redsand, Kegums and Lommel it’s a challenging calendar.

The last round at Imola is going to be very interesting to see what the track is like, if they do a good job with the track that could be another cool GP that’s here to stay.

One thing I will miss is the American GP, it’s always interesting seeing the top GP riders go up against the American’s in there home back yard but it’s not to be this year with America getting the MXDN.