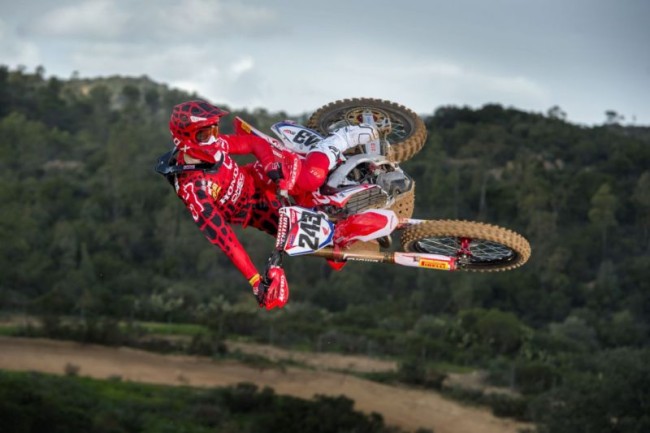 Jonathan McCready: This is a difficult question to answer. Tim has always stated his desire to race a supercross and at the Monster Energy Cup we saw that he is competitive with top ten level guys in the states, but he also had a big crash and that will be the worry for HRC Honda who want him to win the 2018 MXGP world title.

According to Steve Matthes, Gajser had tried the supercross suspension during his test week before the event but found the springs to hard for his liking, opting to go with a stiffer version of his motocross suspension. But to those there it appeared that Gajser’s suspension was too soft for the big landings, and Jason Thomas felt that that soft setting contributed to his big crash as the bike rebounded harder after casing the jump.

Taking all this information on board means that racing A1 with the addition of whoops and stronger field than the MEC means the risk for Gajser will be higher and it will also be just two months away from the start of the MXGP season – Honda will not want their main title contender getting injured before the season starts.

However they also know that Tim has given them two world titles and elevated their profile on the world stage, and that Tim and the brand will get some extra exposure by racing such a hugely watched and hyped up event.

But with Cairoii and Herlings on such a high level in MXGP, Gajser also needs to make sure that A1 wouldn’t affect his preparations to reclaim the MXGP title he lost in 2017. Tim is one of the few riders with the raw talent and mental strength to take on Cairoli and Herlings for the title and those two will be full steam ahead with their motocross preparations as Tim prepares for Anaheim.

But, with what he has given Honda, even though it isn’t the ideal MXGP preparation, I feel they should possibly still let Tim race if he wants too. It might even satisfy his US supercross dreams enough that he will want to stay in MXGP long-term and HRC will get to keep their prized asset in order to give Herlings some competition over the next five years or more once Cairoli retires!

Andy McKinstry: “Tim has never made any secret about wanting to race in America and if it was solely up to him he would probably decide to race A1. However, should he? Honestly, I think it would be best for the Slovenian to give it a miss.

It was a difficult 2017 season for Gajser due to injury but before the injury he did have the red plate and I think he really needs to focus on the MXGP World Championship in 2018. If Gajser wants another world title he is going to absolutely be on top of his game against the likes of Jeffrey Herlings, Antonio Cairoli, Romain Febvre and Max Anstie to name a few.

Sure, let’s be realistic, he’s not going to beat Herlings in the deep sand but those are the weekends Gajser needs to be on the podium. He can’t afford to be fifth – tenth because he will then lose all the points he can gain on his championship rivals in hard pack. I’d love to see Gajser really have a productive winter in the sand and some hard pack so he comes out swinging in Argentina. He really can challenge for another world title but if he spends to much time in SX it could hinder him and not only that he could get injured. We already saw what happened at the Monster Cup! “