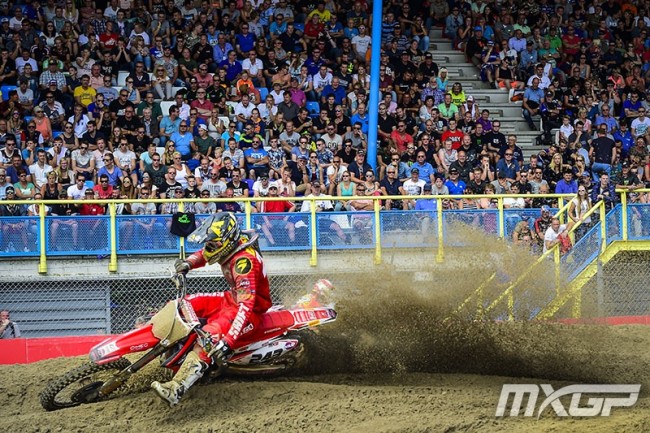 Andy McKinstry – “After winning the MX2 World Championship, Tim Gajser could be set to step up to the MXGP class for the 2016 season. A very bold move from the Slovenian rider if he decides to move up the premier class. If I was in Tim’s shoes I would stay in the MX2 class for one more year. The reason I believe he should stay in the MX2 class next year is so that he can go head-to-head with Jeffrey Herlings for the title. I believe after winning the title this year he will be more confident than ever and if he stays in the class then he could give Jeffrey a run for his money – he is that good! He would also gain more experience before moving up to the class in the 2017 season, although having said that he has already got a good head on his shoulders as he rode smart to win the title this year.

There is no secret that Tim enjoys riding SX and would like to go to America in the future and I believe this is part of the reason that he wants to go to MXGP next year. HRC have invested a lot of money into Honda and really want that title. Tim has seen what Romain Febvre has achieved this year and knows he will have the speed to run at the front and win some races. As we have seen this year, anything can happen MXGP and Tim clearly wants to win that title and then he can go to USA having won both world championships.

Tim is very big for a 250 and has said that he loves riding the 450 so he will suit the bike, in fact he will probably suit the 450 more than the 250. He has rode the 450 at the last two Motocross Des Nations events and crashed in both though so he still needs to learn the limit of the bike and not ride it like a 250.

If Tim does make the move to the class, what does this mean for Honda? They will surely need to sign another MX2 rider alongside Jorge Zaragoza. The problem is all that all the top riders in the class have already got contracts for the 2016 season so they would probably have to look at someone like Ben Watson (has a contract for Hitachi Revo next year) or Sulivan Jaulin. They would be good options and could run in the top five but with all due respect, neither of them will challenge for the title.

Gautier Paulin might also be affected by Gajser’s move as he will want to be the number one rider and needs all the focus to be on him to improve on this year. Gautier will want to challenge for the title in 2016 but if Honda start putting more focus on Tim instead then we may not see the real Paulin next year either!

It will be very interesting to hear what Tim decides to do but if he moves up with MXGP along with Jordi Tixier and Valentin Guillod then the class will be even more stacked and competitive than it was at the start of the year in Qatar!”

Jonathan Mccready – I think this would be a good move for Tim. He loves riding the 450 and in my opinion is even better on it than the 250. He is also a big guy and I don’t think the 250 Honda is as strong as the KTMs and that puts him at a disadvantage in the MX2 class.

Moving up next season would give Gajser a free season to learn the class, he wouldn’t have the pressure to win but will gain invaluable experience in the toughest class in the world.

When you see what Febvre has done this year too there is no reason why Gajser (who beat Febvre at times in 2014) can’t win races or at least make the podium at times next season in his rookie year too. He is that talented.

The advantages of staying in mx2 are less although for Honda they would get to run the number one plate but there is no guarantee Gajser would retain the title ( Herlings has painfully proven that) and, even if he does, it’s a title he has already won so going to MXGP I believe will give him more experience against more top riders. HRC badly want the MXGP title and adding Gajser to their ranks will only increase their chances.

Gajser may have seen what has happened to Herlings by staying down too long and wants to capitalise on the momentum he has right now. He is maybe the biggest natural talent since Herlings and I believe he belongs on a 450 in the premier class of the world championship now.