Talking point: Should the MEC move it’s date not the MXoN? 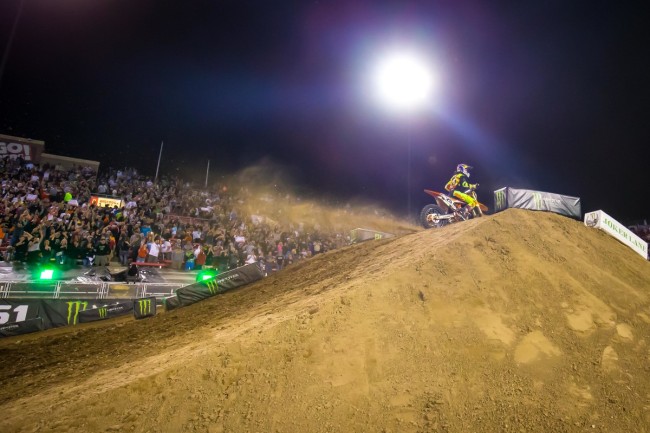 Unless your name was Marvin Musquin the Monster Energy Cup seemed a bit flatter than previous years.

As soon as Eli Tomac crashed spectacularly out of the race, Marvin went virtually uncontested to the win as a lack of entries meant a lot of the supercross specialists didn’t race and the depth was not comparable to an AMA supercross race in January.

After the schenanagins over #dategate regarding the MXoN by the US motocross industry, it seems that it is actually the Monster Energy Cup that is in need of a revamp and a different date, NOT the Motocross of Nations!

As the rest of the world enjoyed the huge global event that is the Motocross of Nations, a race that sees the world come together in a celebratory competition of motocoss and patriotism, negativity bizarrely abounded in America, and America only, about the timing of the race.

But when all was said and the done the fans flocked to the event that proved massively successful yet again and is simply the biggest race of the year.

Eli Tomac decided to concentrate on Monster Cup (Monster are a chief sponsor of Tomac’s team) because it was only two weeks after the MXoN and he wanted time off and time to prepare, but the American unfortunately crashed out of the event in the first moto.

Meanwhile Dean Wilson raced both and made the podium in both events – showing that it can be done even if there is little downtime.

Wilson rode the MXoN and the MEC Pic: Husky

The entry for the MEC was poor and simply didn’t compare to the MXoN and it prompted those in America slightly belatedly to suggest the race should be put back to later in the calendar and closer to the 2018 supercross season.

It makes sense. That would in turn also free up more time for the US riders to compete at the MXoN with no off-season supercross race right around the corner. It could be a win-win for everyone involved, especially Monster who want all the top names at both events they sponsor.

With the US riders only getting their initial supercross preparations started at the beginning of October and the feeing the need to start earlier to get somewhat ready for the MEC, it is a strange time for the event as no rider is really dialled in or close to their level at the that point.

The usual supercross pre-season races like Bercy, Geneva and the Aus-X open are usually held in November 6-8 weeks away from the US series. It gives enough time for the riders to get dialled in and get some race time under their belts before December and the crucial month of preparation before Anahiem and it seems the MEC would be much better suited to be in and around that time-frame.

The MEC event itself is cool and the three main events give spectators good value for money, but you need all the top supercross guys there to give it a proper pre-season supercross preview feel, that in turn would ratchet up the hype for A1 that would then only be a few weeks later!

Maybe now after all the agendas, the reality of the Monster Cup needing a date change and not the MXoN will finally put an end to the blame game and both races can then be enjoyed as the great events they were designed to be.