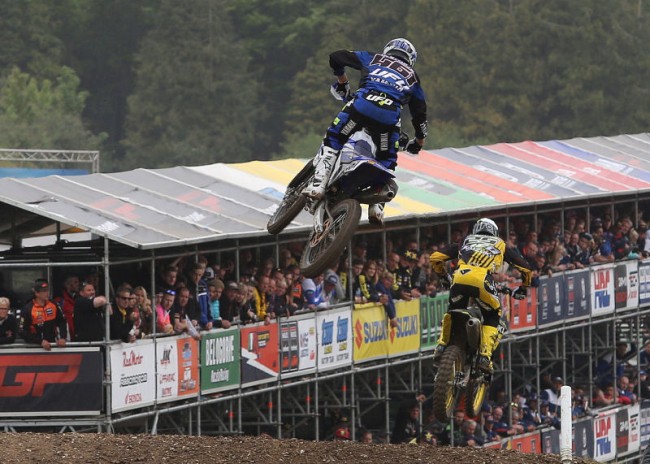 Every year MXGP always welcomes new talent into the class thanks to the age rule in MX2 which means when riders get too old for that class they then make the step up to MXGP. Last year Romain Febvre was fast and finished third in the MX2 world championship. Yamaha decided to sign him for the MXGP class which meant he secured a factory ride in his rookie year as team mate to Jeremy Van Horebeek.

I knew that speed wouldn’t be a problem for Romain and podiums would be possible. However, last year he was really aggressive on his Husqvarna 250, he crashed a lot! I was worried on how he would adapt to the 450 and was expecting him to crash a lot. Truth be told he is like a new rider on the 450, he is so smooth on the Yamaha and it’s brilliant to watch. I knew speed wouldn’t be a problem for Romain because we all seen how fast Tonkov was in Latvia on a 350 for the 2014 des nations.

After I seen how fast Tonkov was I asked myself the question, how fast and good could Febvre be in MXGP? The answer to that is very good. I knew he would be in an around the top five and he started the season with an impressive sixth overall in Qatar.

He keeps improving as he keeps getting used to the 450, he won his first moto in MXGP at Matterley Basin – passing Cairoli and Desalle to do it. He was then able to take his first GP win of his career in front of his home crowd in France, he dealt with the pressure well. His confidence will be sky high at the moment and he is on a roll. The fact he has won an MXGP overall is impressive considering he didn’t even win an MX2 overall – crazy to think how much Herlings used to beat these guys by in MX2.

The future is bright for Romain, he hasn’t got so much pressure this year because he is just a rookie but he will be going into next season as a title contender if he can keep riding like he has been. Will he be able to deal with the pressure next year? I think he can, he doesn’t seem intimated by the big names around him and always goes for it.

Yamaha always seem to make it work with riders in the first year with the team, Steven Frossard and Jeremy Van Horebeek were really fast the first season they had on board with the Yamaha but put too much pressure on themselves the following year because they knew they could win the title. It will be interesting to see how Romain deals with it next year and if he can actually challenge for the title in 2016, there is one thing for sure though and this is one of the most promising teams Factory Yamaha have had in a long time!

Valentin Guillod will be riding a factory Yamaha in MXGP next year whether that will be under the Factory awning or staying with Standing Construct remains to be seen. Valentin won’t have much pressure in his first year, could he show the same speed as Romain in his rookie year? It’s going to be interesting to say the least!