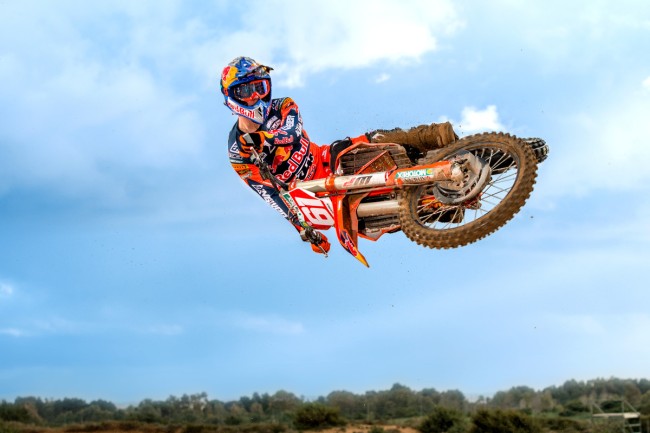 Andy McKinstry: Not only is Jorge Prado arguably the best 250cc rider in the world but he’s also very intelligent for eighteen years old.

Growing up it’s no secret that Prado always had the dream to go to America and race the AMA Supercross. I remember speaking to Jorge’s dad when he was in the EMX125 class and he admitted he’d most likely head to America.

However, why the change of heart? Well, Prado has made the switch to the Italian side of KTM and working with Claudio de Carli. The pair have worked really well together and after his rookie year in MX2, de Carli was able to help Prado identify and improve his weaknesses. The year later he won the MX2 World Championship against a very tough competitor in Pauls Jonass.

Honestly, I think Prado will surprise a lot of people next year if he does end up going to MXGP (if he ends up losing the MX2 title next year he will most likely stay MX2 again). Let’s be honest, the Spaniard is probably the best starter in the world so you have to imagine that’s something that will continue in MXGP.

With good starts, it means he will get to see the pace at the front pretty much every single moto and with the talent he has it probably won’t take him too long to pick up the speed and intensity.

Some people seem to be worried that he hasn’t got the strength yet for the 450cc but he rides with so much technique I don’t think it will matter too much. Let’s not forget he will have a full winter’s preparation putting in the laps with Cairoli who’s not a bad training partner to have!

As for people wanting him to go and race Supercross, I personally believe MXGP is the hardest championship in the world so it’s nice to see him take on the challenge. At 22 he might decide to then go to America, who knows what the future holds for Prado. Most riders need to go early in their career but Prado is so good he could probably adjust to Supercross at 22.

Jonathan McCready: In one sense it would have been nice to see Prado in America, even for a couple of years until he gets a bit stronger for the 450. I think with his technique he could adapt to supercross fairly easily but he will still just be 22 when this new contract is up so there will be time if he still wants to race indoors and begin a new chapter of his career.

Right now his focus is motocross, and for MXGP it’s going to be great to have Prado going against Herlings and Gajser as well as Cairoli. It will certainly give Jeffrey Herlings extra food for thought, Prado is a fast learner, a great starter and doesn’t make many mistakes or ride the edge. With Tim Gajser only 22 as well and Herlings just 24, the future looks superb for the toughest motorcycling championship in the world.

It has become clear that, unless you want to be a supercross rider, you have to stay in MXGP to be the best motocross rider in the world. The elite level contracts are big for those in contention in MXGP and the risk and reward to going to the states to learn a new sport and a new life at Prado’s age, just when everything is going well in MXGP, isn’t always the best decision for your career, especially when MXGP is now regarded as globally prestigious as supercross if not more so.

Right now, with a great team behind him in DeCarli KTM, along with the experience of Cairoli alongside him, Prado has all he needs to reach his potential and win an MXGP premier class crown and that appears to be his priority, at least in the next four years.

While winning the title next year might be a tad unrealistic, as he is fairly small in stature and being launched into a very competitive class, Prado, with his holeshots, will learn the pace quickly and should be a threat for race wins and overalls when it all clicks.

Prado has all the tools to give Herlings, Cairoli and Gajser a run for their money, the only thing he lacks is experience but the talent and technique are already there. The premier class in motocross is about to get even more exciting as we enter a new decade of Grand Prix racing.