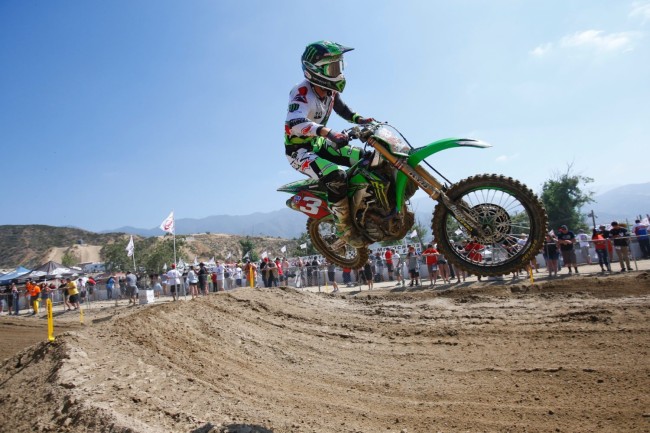 In part one we talked about Cairoli v Herlings duking it out for supremacy in world motocross.

But in America’s national motocross championship series there is another perhaps even more intense rivalry – Tomac versus Baggett. With rival manufacturers and with a lot of talk from Baggett taunting the Kawasaki man, plus Baggett’s old rival Jason Anderson chiming in against Baggett for good measure, there is a lot going on in America right now with the title contenders!

Baggett has been talking down on Tomac, saying he “broke” him after their battle in Colorado. But Tomac is the strong silent type and didn’t respond publicly (except for “liking” Anderson’s tweet about Baggett talking nonsense!) but did admit it fired him up!

When Tomac got out front early in the second moto at Muddy Creek, Baggett said he let him win because it wasn’t worth the risk to catch him when he had the overall wrapped up with a 2-1 – and felt it wouldn’t give Tomac any extra momentum.

Tomac insisted he would do his talking on the track and he did just that in the first moto at Red Bud. Tomac passed Baggett as they came through the field and took the lead but Baggett didn’t give up, and did a Cairoli-like charge at the end, to catching Tomac and give the fans the battle they wanted – a straight up fight between the two title contenders who simply don’t like each other!

It was then that Tomac let his riding talk the loudest. Under extreme pressure from Baggett going into the last lap, this was a mental test of resilience under pressure and Tomac responded in style. The Kawasaki man put all that frustration into his final lap with Baggett to inch away and win the race – setting the fastest lap of the moto in the process!

That was a bigger statement that any comment Baggett had made in the media. Baggett had it right there to pass Tomac for the win and Eli just upped his pace and pulled away right when all the chips were down. It was a champions performance by a classy rider.

Meanwhile Baggett’s bragging caught up with him in moto two when his other rival, Jason Anderson, slowed momentarily in a rut long enough for Baggett to clip his back tyre and go down. Now Baggett goes into Southwick 13 points down on Tomac with an injured thumb and has lost the momentum he had gained a couple of weeks ago.

Can Baggett rise up again and run Tomac down or will Red Budd be the crucial blow to his title hopes?

And will the feuding duo get on with each other if they are both chosen for team USA at the MXON?!

Watch their last lap shoot-out in moto one at Red Bud here: