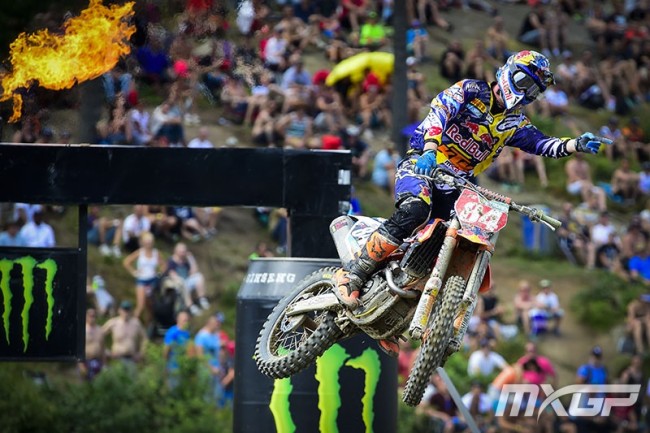 Andy McKinstry: Last week Jeffrey Herlings made the announcement that everyone had been waiting for and he has decided to stay in the MX2 class. Jeffrey has previously said that he would wait until he was back on the bike, ride both bikes and then decide what class to ride in the 2016 season. However, he announced that he would ride the MX2 class before even starting to ride again. Surely it would have made more sense to ride the bigger bike first to see what his speed was like before making a decision?

Jeffrey has stated that he wants to win titles and winning the MX2 world championship would be easier than winning the MXGP title – he is correct. However, the last time Jeffrey completed a full season in MX2 he was winning races with ease and no challenge whatsoever. It is clear that over the last two years the riders behind him have closed the gap and quite considerably too – part of that is due to Jeffrey’s injuries. However, the point is that staying in MX2 could hinder Jeffrey’s confidence.  He will be under a lot of pressure to win and if someone like Paturel is able to run with Jeffrey for a moto it will affect his confidence due to the fact he has been so used to winning so easily in the past.

Jeffrey will still be favorite to win the title and will more than likely win the title but will he improve as a rider? No and if guys start running with him it will affect his confidence. Jeffrey has said that he wants to dominate MX2 before moving up to MXGP, but he already achieved that in 2013. Romain Febvre has proved how fast those guys are in MX2 and that you don’t need to dominate the class to win an MXGP title. In 2013 Romain was learning a lot of Jeffrey but now Jeffrey would learn a lot by riding with Romain in the MXGP class.

If Jeffrey decided to move to the MXGP class he definitely has the speed to win and wouldn’t be under pressure to win. If he had a bad start and ended up in fifth or sixth position that will be okay. However, he won’t be able to finish fifth or sixth in the MX2 class as he will be expected to win most the moto’s but it won’t be all that easy – a few bad moto’s could mess with his head.

Anyway, Jeffrey has had a lot of injuries in the past few years. Hopefully he can stay injury free in the 2016 season, win the title and then finally make the move to the MXGP class in the 2017 season when he will then start to improve as a rider again.

Jonathan McCready: When you have broken a femur and then a dislocated a hip, not to mention a broken collarbone and damaged finger and back, all in about 12 months, then you can understand Jeffrey Herlings’ decision to stay in MX2. Herlings wants to try to get the third title (and the championship bonus) plus bring your speed and confidence back to where is was in 2014 before his broken leg.

It’s a good theory and if it works out then Herlings, you could argue, has made the right choice especially financially and where the record books are concerned.

But there is probably more risk in staying in MX2 than reward in the long term. If Herlings wins easy he isn’t learning to race with others like he will have to in MXGP. If it’s close Herlings won’t get the confidence he is trying to get back because in his mind he wants to dominate. A lot of his mistakes last season came because he wanted to get to the front as quick as possible and was frustrated that Gajser and co. were on his pace.

Former MX2 rider Romain Febvre not only gained experience and speed but won the MXGP title last year! This year MX2 world champions Tim Gajser and Jordi Tixier will have a free year to learn without the pressure to win the title. Both riders should suit the 450 better so by the time Herlings moves up in 2017 Tixier, and especially Gajser, will be one year ahead of him in riding the bigger bike and in the toughest class.

Herlings did mention he needed three months to prepare for MXGP and if his is riding now that gives him the three months he required, but maybe he just doesn’t believe in himself enough to race in MXGP. It seems to me Herlings doesn’t want to race MXGP as one of the guys that could win, he wants to enter the class ready to dominate it like he has in MX2, but why put that unnecessary pressure on yourself?

Racing MXGP this year would have taken the pressure off him, he wouldn’t have been expected to win every race and the title. Yes, he would have been a title contender, but it wouldn’t be a disaster if he went 3-5 in a race given the talent in that class. To me he would have learnt more in MXGP by losing races against so many top riders than he will winning races in MX2. In MXGP Herlings still had a good chance at the title but wasn’t expected to win every race – it was the perfect scenario in some ways.

Now Herlings has to win again but his unbeatable tag isn’t there like it was before the injuries. Dylan Ferrandis for one won’t be intimidated and neither with Max Anstie. Pauls Jonass isn’t hanging around either and has much more self -belief than he had the year before. Herlings has put himself in no-win situation again, if he wins it’s expected, if he loses even a couple of races it’s a shock.

But maybe he just needs to win and dominate again in his own mind after 12 months of pain to believe in himself again, despite the fact that everyone else knows he would be a top guy in MXGP next season if he moved up and is already more than capable of contending for the title.

However it’s easy to say as a fan that Jeffrey should move up, we all want to see all the best in one class and the Cairoli/ Herlings showdown we have been robbed of the last couple of years has still, frustratingly, failed to materialize. But for Herlings has lost two MX2 world titles due to injury and been through a lot pain. If he wants to get that third MX2 title that he feels he’s owed and to find his pre-injury speed again, then we have to respect his decision and enjoy watching the super-talent getting back to his best.