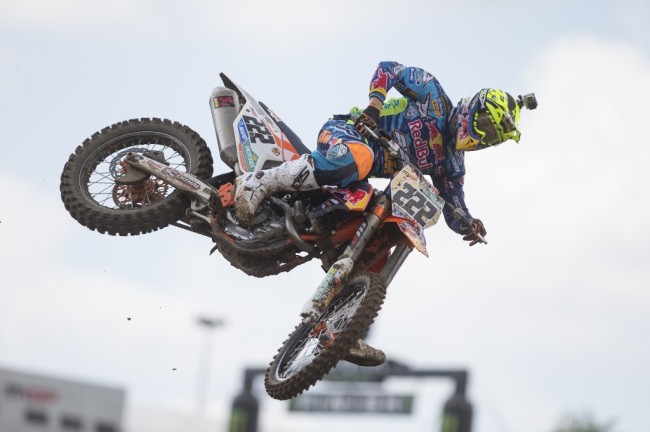 It’s been a tough few months for Antonio Cairoli.

In fact ironically, it all started to go wrong one year ago at Valkenswaard when the Italian, who had won the previous five Grand Prix events at the sandy venue, crashed big time in the first moto chasing leader Gautier Paulin.

Cairoli, even if he had finished second, would have taken the point’s lead after that moto but after that crash Cairoli was always playing catch-up in the title chase. The Italian even changed bikes from the 350 to a 450 before his broken arm at Maggoria would eventually put an end to his undefeated title reign in the big bike class that saw the Italian win the world title for seven years in row.

Now one year on, defending world championship Romain Febvre has all the momentum, while Cairoli lies fifth in the championship 28 points back and has been dealing with injury yet again.

Cairoli broke some ribs during a pre-season testing crash and admitted: “After the crash in Sardinia I wasn’t expecting to race in Qatar.” But he gutted out a top five overall there and almost won the first moto in Thailand after a hard battle with Febvre that showed everyone Cairoli is not about to hand over the mantle of ‘the man’ in MXGP just yet.

However a 12th place after bike problems in race two has really opened the gap to Febvre in the title hunt and Tony really needs to get some momentum swinging his way soon.

Cairoli has had over two weeks to train and improve his bike fitness and should be as close to race ready as he has been in a long time. So what better place to do turn your luck around than Valkenswaard? The place Cairoli dominated when he won his world titles, is now the place Cairoli wants to get his 2016 world title challenge back on track and, amazingly, get his first GP win since the British GP on the 24th of May last year.

We got a brief look at the ferocity of the battle between Febvre and Cairoli in Thailand. Febvre won that battle but only after Cairoli cut him off a couple of times and the Frenchman was left shaking his head and was then barely able to speak after the moto such was the effort it took to beat Cairoli in the heat of Thailand.

Make no mistake, Febvre doesn’t want to let Cairoli get any momentum, he of all people knows how powerful that winning confidence can be. He shut Gajser down straight away after Qatar, and there is nowhere else Febvre would like to beat Cairoli than Valkenswaard on historically maybe the best track on the calender for the legendary Italian.

But Cairoli knows this is his best chance to get a GP win so far this season, he needs to get some points back on Febvre and get that winning feeling again.

This might be Cairoli’s most important GP in a long time, he needs the momentum, he needs to stop Febvre, he needs to win a GP! This weekend could be pivotal in the power struggle between the last two MXGP world champions!