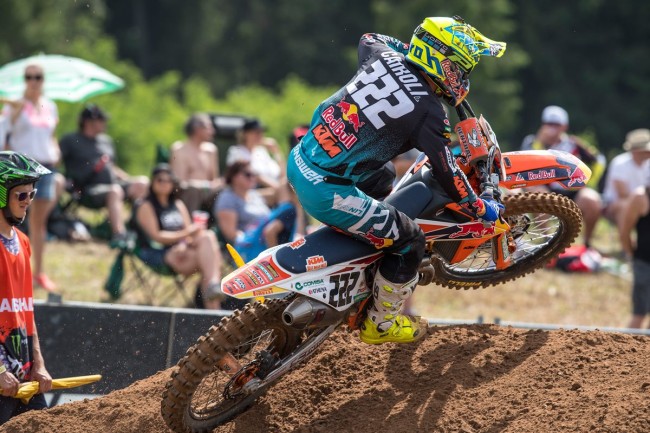 The bizarre, almost anti-motocross new idea from the MXGP track prep crew have unfortunately seen an end to the rougher tracks over the last couple of seasons in MXGP.

Unsurprisingly, smoothing tracks, so bumps are small and lines are sparse, appears to be the not so magical formula for the world championship these days. It isn’t stopping injuries either, as the high speed nature is providing big crashes with Tony Cairoli the latest big name to have a high-speed get off and be ruled out for the rest of the season.

While big bumps are bizarrely deemed bad on tracks , despite the riders being the best in the world, the dangerous move of watering on slick tracks, especially on the faces of jumps, seems to be continuing.

After the German GP Jeremy Seewer said to Andy McKinstry he wants, rougher, slower more technical tracks: “ It was nice to ride a slower track out there and a more technical track were you don’t have to go fifth gear and all in achieve what you want.  You could ride with technique, this is what I like and it’s the better way. They did a bad job the last two GP’s with that but I loved it. It was good stuff and that’s how every track should be.

“In Kegums for example, they flattened it way too much between the motos, MX2 was basically a highway, you know? They all think about injuries because the last few weeks it’s been tough on us, the MXGP class with injuries. I think it comes from the fast tracks, there are no bumps, okay it might look less dangerous but you go a lot faster so you need to risk more.”

Stefan Everts, talking to Jeff Emig said he feels the series has got much bigger and more professional but the tracks, in some cases, are over prepared. “The tracks got changed, bigger, smaller, more jumps, some tracks are faster and less technical than the past. (They have) more preparation, in the past they would just leave the track and put some more water on and you were left to make your own lines out there, which was good I think. I think sometimes (nowadays) there is too much preparation.”

This is a continuing trend with riders wanting rougher circuits to allow them to show their skills without just pinning it everywhere. At the beginning of last season at the Spanish GP, Pauls Jonass asked them to not level the track overnight in the press conference so it would get more bumps for the Sunday, but they didn’t listen and totally flattened the track for Sunday making race day very, very hard to pass as everyone was on one line just pinning it.

For whatever reason the track prep crew don’t seem to be listening but they need to start doing so soon. AMA tracks are now left rougher, less prepped than before, while MXGP is bizarrely going away from what made it it unique and very successful. A two day event with the track left rough (just fix dangerous areas) from Saturday for the point scoring motos on Sunday is what it should be, not to pin it to win tracks that take away skilful, fit, creative and smart riders’ ability to make a difference.