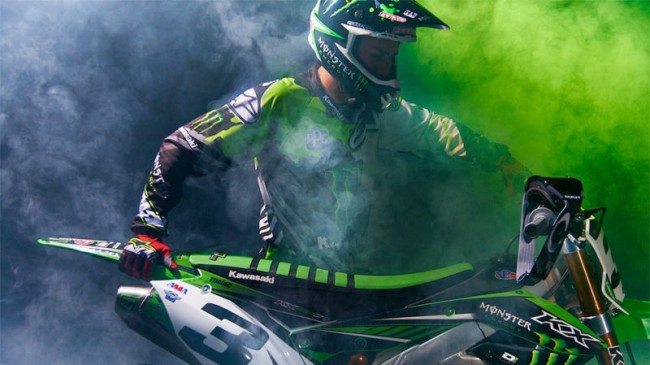 With two year’s experience Eli Tomac should be approaching his prime years in the 450 supercross class.

He knows he has the speed, he knows he now has a championship winning calibre team behind him. And you can be sure he knows he just needs to cut out the silly crashes.

Being injured for the last few months has hopefully given Tomac the time to reflect on strengths and weaknesses, and his decision to sign with Kawasaki may be pivotal.

The winning experience of that team combined with Tomac’s own personal experience might just be enough for Tomac to find the consistency he needs to seriously contend for his first 450 supercross title.

But it won’t be easy, it’s hard to have the consistency of Ryan Dungey but also beat the defending champion regularly. Then if you beat Dungey you could well have to contend with the sheer speed of Ken Roczen, nevermind the aggression of Justin Barcia and natural talents of Trey Canard and Marvin Musquin to name a few!

But there is no question that Tomac can be the fastest rider on the track, perhaps the only rider who can get close to Tomac on his A game is Ken Roczen.

It seems it is now a race to see which of the two talented youngsters can combine their undoubted speed with Ryan Dungey’s famed consistency. But after the public problems with Ken Roczen and his RCH Suzuki team last season, you have to think Tomac’s factory Monster Energy Kawasaki team may give him the advantage.

And Tomac seems to believe his new team change will help his title challenge: “I made the move to Kawasaki, for me it’s exciting because it’s premier 450 factory team, I see the potential in the chassis, I believe in the team and I believe in the whole program.” admitted Tomac on the FOX sports preview show.

“They have won plenty of championships, I walked into the shop the other day and saw all the number one plates, it’s serious business but it’s awesome, it gives me extra confidence. These guys can win, now it’s all on me.”

Tomac knows this season is the biggest in his career so far, there are no more excuses, he has the experience, the has the speed and he has the tools to get the job done: “Being that it’s my third year in the class it’s crunch time for me, I got second place last year and there is only one step to go.”