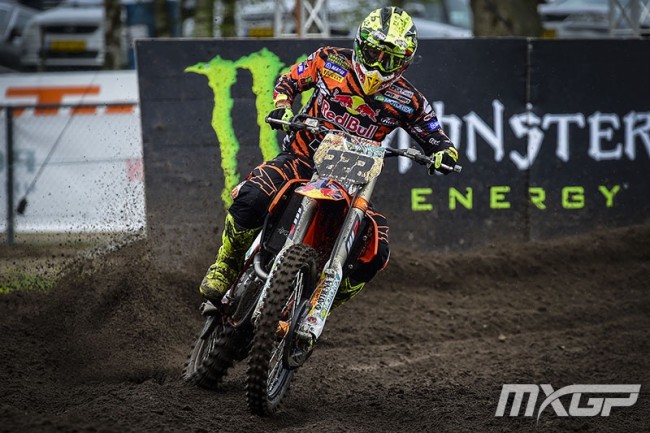 It has been quite an incredible season in MXGP so far but not in the way many expected! Cairoli and Villopoto have got injured, Nagl is the man to beat and Herlings only won two of the first four GPs!

It was hard to narrow it down, but Gatedrop takes a look at the top five most unexpected moments of MXGP 2015:

This had to be the most unexpected moment of the season. Cairoli’s season up to that point had been solid if unspectacular but the plan was working well and until the crash it looked like Cairoli would leave with the red plate and it would be business as usual.

Cairoli just doesn’t crash like that, especially in sand, especially at Valkenwaard where he has won for the last five seasons! This was one of the GPs you could bank on for a Cairoli win. But that pesky rock and the speed of Paulin led Cairoli to make a mistake on a sand track that hasn’t been seen in years.

As a consequence Cairoli broke a bone in his hand, struggled to seventh in moto two and left 30 points behind the championship leader. And now he is considering riding a 450 in Spain this weekend. Cairoli crashing out at Valkenswaard and riding a 450 by round six are two things that no-one would have predicted going into the season!

“A rookie mistake.”  That’s how Ryan Villopoto described his strange crash in Italy. After a shaky start at the first three rounds many felt RV had left himself a lot to do on the return to Europe and as it turned out, the first slick track was what caught the aggressive American out.

Those in the know and amongst the GP paddock knew RV wouldn’t have it easy despite what the US fans, media and industry thought. But Villopoto probably struggled more than anyone expected in the first three rounds, then, once Desalle put that pass on him on the downhill in Italy, Villopoto went from riding calm to riding angry, he tried to wipe the front wheel of Desalle on the re-pass then was trying to cut across Desalle again when he gave it too much gas and fell off the back.

Everything everyone feared but didn’t want to happen had just happened, Villopoto was too aggressive on a slick track and paid the ultimate price with an injury. VIllopoto won’t win the championship this year, but maybe it will be a blessing in disguise and he will come back next season and the world will get to see him and Herlings take on Cairoli, Paulin, Nagl, Desalle and the rest of the MXGP field.

After winning the first two GPs, you would have got long odd on Jeffrey Herlings losing the next two GP, but that’s exactly what happened! His teammate Jonass wiped him out in Argentina and then Tim Gajser pushed Herlings to breaking point in race two in Italy. Herlings had put everything into catching rth Slovenian after a poor start but he over-cooked it on the last lap just when he had caught Gajser and went down. Gajser had forced Herlings out of his comfort zone to win his first GP in style. After the race Herlings showed his maturity and congratulated the HRC man and maybe inside the Dutchman was pleased to have a challenger forcing him to ride that hard and giving him some competition!

Of course Herlings destroyed the field one week later in his native Holland to re-establish a big points lead and make it business as usual!

4. The world champion getting banned.

The mild-mannered world champion usually doesn’t have a great start to the season but no-one expected it to go this badly! Tixier wasn’t allowed to race moto two in Thailand after getting an IV for exhaustion after collapsing before the finish in moto one. Tixier was so frustrated that he punched the doctor and got himself banned for round three!

After what was a promising pre-season for Tixier who seemed to be loving the Kawasaki, his title defence was already in tatters by round two! It was a nightmare start to the season but Tixier has recovered in the last two rounds to make the podium and we are finally seeing the speed of the World Champ on the Kawasaki, unfortunately it’s too little too late to challenge for a second title

He was the picture of consistency last year on the Yamaha and was barely off the podium all year but in 2015 it has been the total opposite. After a solid top five in Qatar Van Horebeek has been crashing all round him and finally ended up breaking his foot in Italy. Van Horebeek should be ready to race again by the British GP but his championship dreams are over in 2015.

What caused the crashes? Van Horebeek seems to be at a loss to explain the reasons, his speed was still there but bad starts and having the pressure of being a championship contender maybe got to the Belgian who usually prefers to work away in the background without the pressure of having to win races or championships. This was the first year Van Horebeek has ever talked about winning races and going for a world title and maybe it got to him. Hopefully he will be able to keep the ambition but control the pressure better next season. As of now Van Horebeek as already stated he just wants to win races once he comes back to MXGP competition this year.

So, what more can happen this season? After all we are only five rounds in to an 18 round championship!