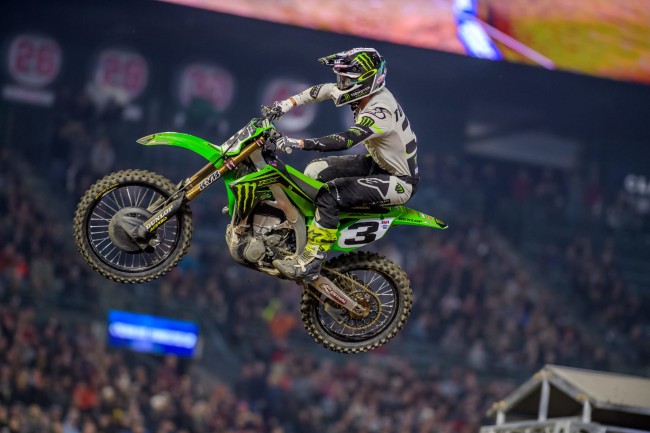 Yet again Eli Tomac has left everyone mystified after another head scratching performance. Fully healthy with a year on the new bike, Tomac assessed he needed better starts and to manage the series better for 2020, but then he went out and got seventh at A1 behind his championship rivals and his new teammate.

An average start didn’t help things of course, nor did the tight track, but Tomac, once he got to seventh, bizarrely didn’t make any ground on those in front of him. A strange place to be for the guy who is often the fastest man out there.

Tomac talked pre-race about not putting himself in a hole at the beginning of the year and not having to play catch up, but is the pressure of being in contention (as everyone is on gate at A1) weighing too much in his mind? When Tomac has the chance to take control of a supercross series he seems to flounder, it happened when he got the red plate off Dungey, and when he got relatively close to Webb last year he made mistakes to hand Webb the title. Maybe the pressure gets too much to handle for Tomac when it comes down to delivering in the big moments to win the big prize?

It’s a strange thing to say when you see he has won the 450 outdoor title three years in a row against broadly the same competition for the title. But supercross has less margin for error, more intense pressure in the moment to deliver and less time to recover from mistakes with just one 20 minute main. Also, the depth in supercross is deeper, with some guys supercross only and others more supercross specialists than outdoor workhorses.

Then there is the ever increasing shadow of Adam Cianciarulo. With a huge fan base and a massive media profile off the track, Cianciarulo is arguably already a bigger draw and a bigger personality to the quiet Tomac who likes to be tucked away in Colorado doing his own thing.

But when Cianciarulo went quickest during the day, ran up front and almost won A1, he is now a big threat on the track as well. You wonder if Tomac saw his teammate up front and that only increased the pressure and the tension as he tried to fight his way through the pack.

“Man, the first race of the season is always an interesting one,” said Tomac on a less than ideal A1. “The whole day is just chaotic. I started feeling a bit of a flow by the end of the last qualifying session today, but in both the heat race and main event tonight I got decent starts but got shuffled back in the first turn and the way the track broke down tonight it became very one-lined and difficult to make passes. The competition this year is deeper than ever, so we will regroup this week and come out swinging in St. Louis next weekend.”

Then, in an interview with Racer X, Tomac revealed he had been suffering from arm pump all day and couldn’t push as a consequence, but he believes he can fix the issue.

It seems a case of deja vu for Tomac with another slow start to the year, but with teammate Cianciarulo now also putting the pressure on within his own awning, Tomac is under huge pressure to turn things around this weekend and establish himself as the fastest man in the class again. Can he deliver under the increasing pressure?