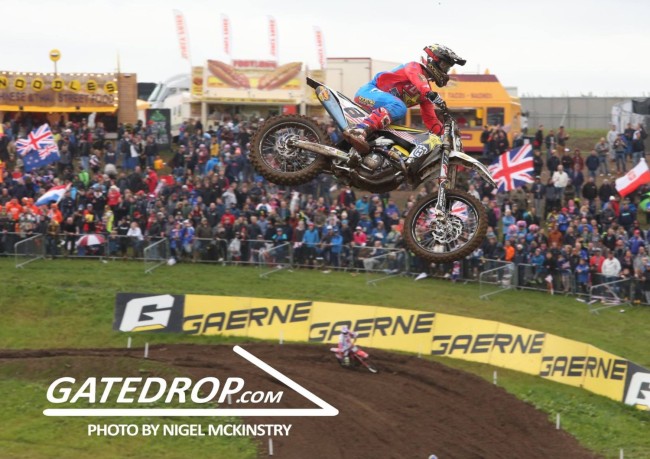 Jonathan McCready:  Did you know the Motocross of Nations was in crisis and facing an uncertain future? No, neither did we! But reading the comments in the US media made me think I was missing something despite the fact we witnessed a hugely successful MXoN event just a couple of months ago!

A fantastic, huge flag-waving crowd from many countries celebrating the sport is always a lasting memory at these events. And 2017 was no exception. Even the rain and mud failed to dampen the spirits of the patriotic brits cheering on their countrymen enthusiastically on home turf to their first memorable podium in 20 years.

And with Max Anstie’s scintillating home win, France winning for a fourth time in row, Hunter Lawrence going toe-to-toe with US National champ, the globally popular Zach Osborne, the 2017 MXoN made for engrossing viewing and trackside adrenalin.

Yet, “The Motocross of Nations faces an uncertain future as does team USA.” was still the startling and interesting comments of Racer X owner and AMA Nationals promoter Davey Coombs in a recent Racer X magazine article looking at team USA’s latest defeat at the MXoN.

Davey went on to say that he felt unless the AMA based teams make the MXoN a priority and the date is altered the race is destined to lose it’s lustre  – and team USA may never win again.

Meanwhile the legendary Roger DeCoster, team USA manager, who is a born winner because he simply hates losing, is now saying the events sponsors won’t get value for money – a clever way to exert pressure on Youthstream to change the race dates to help America win again.

Roger is pulling out all the stops to help America, his commitment to the USA has to be admired but his bias towards them also not forgotten – he desperately wants to lift that trophy again!

But that negativity is at odds with the reality that the MXoN is in great health. This isn’t about the MXoN losing it’s lustre at all, the crowds have been superb in recent years, the atmosphere and drama is second to none regardless of who wins.

It’s only in America this negative narrative is being spoken about and unfortunately it seems the USA’s success is intertwined with it’s perception of the MXoN’s importance and value.

The USA always have a big advantage at this race every year thanks to their huge pool of riders they can pick from compared to the other much smaller nations. As a consequence they are used to winning because no other country can pick the best three riders in their continent.

But during this current period when other nations are winning regularly, it actually has helped breath new life into the event because the more countries that have a chance of winning the better it is for the race – and America are still usually contenders every year.

David Izer, DMXS radio host, accidently revealed reality when he opined that a US win at Red Bud next year will help re-elevate the race to the level it was for the next few years! And he is probably correct from a US standpoint.

That switch in perception of a huge globally popular motocross event just because your country wins is sensational. But maybe part of that mentality is because winning is the marketing tool for the AMA series when the USA are victorious. Lets not forget America believe their national motocross championship is the most prestigious in the world, ahead of the actual world motocross championship and admit they see the MXGP as a rival.

There is more to the event win to American than for other nations. Winning the Nations means they feel a bizarre legitimacy that they can claim the USA riders and AMA are above the world championship and “the Euros.” Of course it’s not a logical argument, because Europe as a team don’t exist at the MXoN and US riders may lose individually but win as a team!

As we saw with RV, racing the world championship is a lot harder than winning the MXoN with team USA. You can’t really compare the two events.

Paulin helps France to their fourth MXoN win in a row in the UK! Pic: Nigel McKinstry

The furore over the date of the race (it was 7 days later in 2017 than it was when USA last win in 2011.) is consequence of defeat, not a reason for it, and a convenient deflection from the reality that the bright lights of supercross is overpowering motocross in the USA.

A compromise may have to be reached to keep the event at the end of September and not October but that shouldn’t detract from the main issue – supercross is overpowering motocross in America.

Speaking on DMXS radio Ricky Carmichael saw the truth: “The emphasis is different over here (USA), I think we all know it. These guys do anything and everything they can for supercross and in motocross they just do what they got to do to get by.”

The Monster Energy Cup is a bigger race than the MXoN in the United states, riders are choosing to race it over the MXoN – that is the reality. Again emphasising the importance of supercross over motocross.

If a US win at Red Bud helps re-invigorate the enthusiasm for the race in the USA – then maybe it would be better if they did finally win again in order to stop the negativity about a race that simply doesn’t deserve it.

Don’t be fooled into thinking that the race itself is in trouble, it’s still just as big as it always was globally and it’s showing no signs deteriorating. In fact it is probably as big as it has ever been!

Americans were negative about the Nations during rare losing streaks and before just like then, all will be fine when America win again – which they will!

Andy McKinstry: “I think it’s safe to say anyone that was at Matterley Basin knows the answer to this question. The Motocross Des Nations event is still great and probably the biggest motocross race of the year.

There’s been plenty of negativity coming from the American media regarding the race. The negativity is mostly concerning the date, but honestly the date is fine in my opinion. The real problem to me is the date of the Monster Cup, why don’t they hold that race in December and then it could be a proper warm up for the Supercross season!

At Matterley Basin the individual racing was superb, especially Jeffrey Herlings and Max Anstie going at it! However, France had control of the victory pretty much from start to finish so it could have been more exciting in that respect. It’s obviously better with the best American talents at the event and them going for the win to make it even more exciting.

I can’t see any of the top American’s having a problem competing at the event next year (at RedBud) and if they win that which they most definitely should everything will most likely be fine and dandy again. Just on the future of Nations that have a chance of winning the event, I feel the Netherlands aren’t a million miles away from victory. Adding in the likes of France, America, GB, Switzerland and Italy. There should be some fun battles ahead at the great event.”