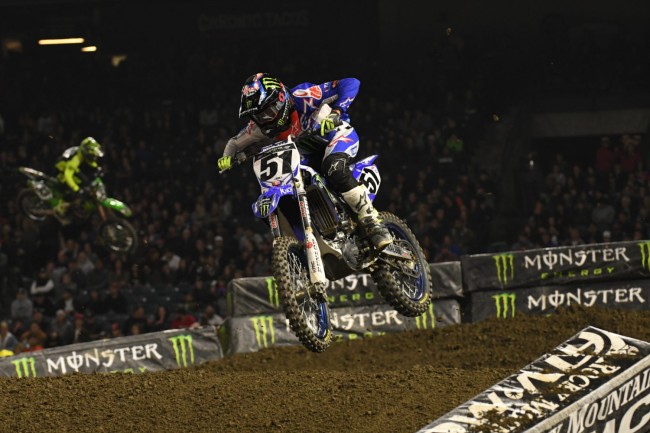 It’s a tricky one as there’s been a lot of good moves. In terms of riders with the most potential, Hunter Lawrence is a great signing for the 114 Motorsports Honda team and could definitely challenge for the MX2 World Championship in 2018. Conrad Mewse also has a lot of potential and he’s signed with the KTM UK outfit who could get the best out of the Brit.

Then there’s Arminas Jasikonis who will also be red in 2018 as he’s inked a deal with the Assomotor Honda team. A great signing for the team as he has huge potential but in all honesty I’m not convinced with the team. I hope they can step up from the past few years and give Jasikonis the machinery he deserves.

Over in America, Justin Barcia is proving to be a very good fill in rider! If he can keep up these performances he might just be best signing, well that is if Yamaha extend his contract but that looks like a no brainer now!

For signing of the season, I am going to go with Jeremy Seewer. The Swiss rider missed out on the MX2 World Championship to Pauls Jonass but I wouldn’t say his speed was the problem! He rode the 450cc Suzuki at the Motocross Des Nations and really looked at home on the bigger bike.

He has signed with the Wilvo Yamaha team for the 2018 season and as he’s the third rider on the team he won’t have much pressure on his shoulders. I could see him being a revelation in 2018 and battling for top fives in the MXGP series. Of course being a rookie in the series he will make rookie mistakes but it will be a learning process for the Swiss rider. I think he will exceed the expectations some people might have for him which is probably to be a 10th – 15th guy.

Jonathan McCready: Using the benefit of hindsight the first name that springs to mind is Justin Barcia! A fill-in rider for Yamaha who was only supposed to do six races has had a two podiums’ already making Yamaha’s decision worthwhile within two races – and you would imagine a longer spell on blue for Barcia as a reward.

But when it comes to MXGP, it’s still a guessing game. Hunter Lawrence is a big coup for Honda and will really show the brand and the new bike in a good light next year in MX2 after a few fallow seasons for the brand after Gajser left the class.

Honda have also re-signed Gajser for two more years in MXGP which is huge for the team and gives them a fighting chance of the MXGP word title.

Wilvo Yamaha also made a good move at the last minute signing Jeremy Seewer. The MX2 GP winner and world no.2 will suit the 450 and this is clearly part of a longer term plan for Yamaha to snap up a great talent that wasn’t supposed to be available to them in the short term. Ben Watson is another great signing by the brand on a longer term basis.

But for me Roger Magee’s Hitachi KTM have got a great deal with Conrad Mewse. He could be the surprise in MX2 next year. To get a factory bike in a privateer team with race-winning talent on paper might just prove to be the best value signing of the season, Justin Barica aside.

When it comes to manufacturers I think Honda re-signing Gajser for two more years in MXGP and having Lawrence in MX2 are probably the best moves of 2018.