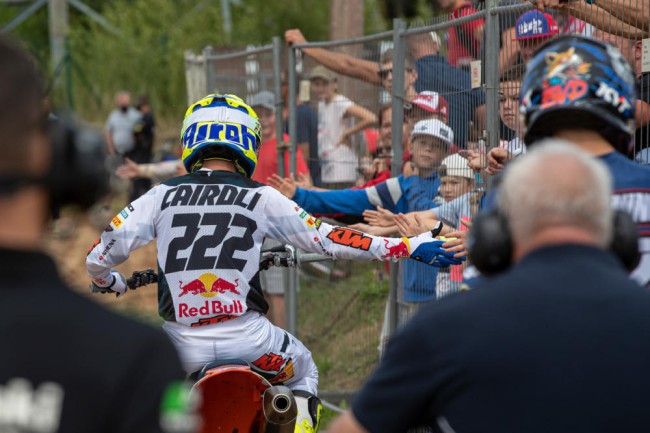 Jonathan McCready: What a rider! If you don’t put Tony Cairoli up there in the conversation with Stefan Everts, Ricky Carmichael and Jean- Michel Bayle as the greatest of all time then for me, it is disrespecting how good Cairoli has been and importantly still is!

At 36 years of age he is still in the thick of the title hunt despite winning his first world title back in 2005. And don’t forget, Cairoli won the second moto on a 250f at Matterley Basin on the same day Stefan Everts retired by winning both his motos. Now, 15 years later, Cairoli is just one world title and 8 GP wins behind the magnificent Belgian.

Cairoli has done it all, comeback rides through the field, dominating motos, controlling motos and now he is giving Prado, Herlings, Gajser and Febvre a run for their money week-in, week-out. Even the last GP in Turkey his remarkable first moto ride evoked memories of his momentous race at Arco a few years ago or when he ran down Tommy Searle at the Irish GP in MX2 despite broken spokes.

He’s beaten all the great American/AMA racers of his era, Villopoto, Dungey, Alessi, Reed, Tomac, Roczen alongside the greats of MXGP including a GP win this season!

For me one of Cairoli’s best years was 2018 – even though he didn’t win the title! The pace he and Jeffrey Herlings showed that year was untouchable for anyone else on the planet and Cairoli was the only one close to Herlings despite being in his 30’s. To up his game at that age and maybe go faster than he ever has before says all you need to know about this remarkable champion.

But off the bike you wouldn’t know he is so special on the race track. Cairoli’s humility off track is in contrast to his determination on it but ask anyone and they will say the same, not only is he a great rider, he is a great person. Cairoli has always made time for and appreciated his fans and also treated the media with respect even if he is doing one interview after another.

One funny moment came after his 2017 world title when he was asked in the press conference what sort of rider we would see at next weekend at the GP following his title triumph and the pressure off, Cairoli’s response? “A drunk one!”

That down to earth humour and on track brilliance mean Tony Cairoli will leave a huge hole in the MXGP paddock, on and off the race track. But his achievements will remain in the record books forever.

Andy McKinstry: It’s a sad day and a day I didn’t want coming just yet… I’m greedy and would have loved to see Cairoli race for one more year because I really do believe he has it in him. However, Cairoli has done enough for the sport and we have to respect his decision to call an end to his MXGP career at the end of the 2021 season.

What a rider he was! 93 GP overall victories and 178 moto win’s in his World Championship career resulting (for now) in nine MXGP world titles  – it’s just crazy numbers. Making his 125cc and GP appearance debut back in 2002, if you’d have even told him back then what he’d achieve in the sport 19 years later, I’m not even sure he’d believe you.

If he doesn’t win the title this year he might not get to Stefan Everts 10 times world championships and while Everts was also unbelieve, for me, Cairoli just edges him in the MXGP GOAT debate. The level these days and especially in 2021 is just insane and to see Cairoli win at 35 years old – he turns 36 in a couple of weeks, is incredibly impressive.  I think we can all agree no one has ever rode a Motocross bike that fast at his age.

We might never see an Antonio Cairoli ever again he’s that special and unique. You can’t question his will to win and his determination. The younger generation emerging in the paddock should look up to Cairoli because as far as I’m concerned, he’s the perfect role model.

In terms of his future and what he’ll do after the 2021 season and his MXGP race career is over – let’s see on that one. He’ll remain as part of the KTM family and who knows, will we see him race any AMA Nationals? How cool would that be!