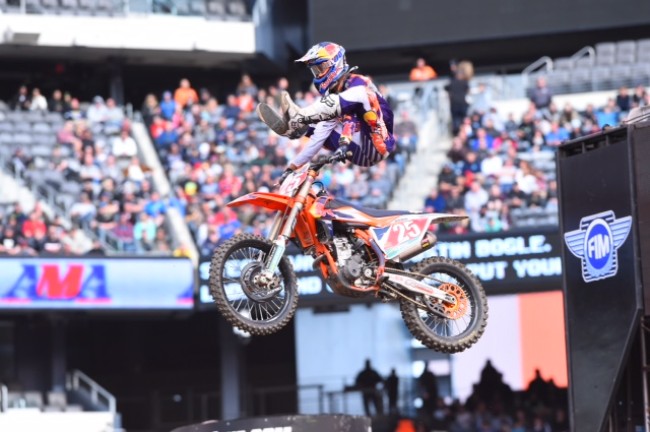 EAST RUTHERFORD, N.J. (April 25, 2015) -Monster Energy AMA Supercross, an FIM World Championship, enjoyed a historic afternoon in the greater New York City area on Saturday as 60,582 fans were on hand inside MetLife Stadium to be a part of the first ever live broadcast on the FOX broadcast network. On the track, GEICO Honda’s Eli Tomac emerged victorious thanks to a strong charge in the closing laps to secure his third win of the season and the third victory of his career. Following a dominant season for Red Bull KTM in which he finished no worse than second in eight races, Frenchman Marvin Musquin clinched his first title on U.S. soil with the Eastern Regional 250SX Class Championship, winning his sixth Main Event on a day where he needed to finish 16th or better.

BTO Sports KTM’s Andrew Short kicked off the 20-lap 450SX Class Main Event by racing to the SupercrossLive.com Holeshot Award ahead of Team Honda HRC rider Cole Seely and Autotrader.com/Toyota/Yamaha’s Weston Peick. Behind them, both Tomac and Red Bull KTM’s Ryan Dungey, the 2015 Monster Energy Supercross Champion, had to battle their way forward from starts outside the top-five.

Just as he did just a couple weeks ago in Houston when he won his first career 450SX Class Main Event, Seely set a torrid pace out front to open a healthy lead over the field. Tomac made quick work in fighting his way to the front and was able to take control of second from Peick on Lap 2. Just a few moments later Dungey followed into third.

At the halfway point of the race Tomac started to close in on Seely and moved to within just over a second of the lead, but a mistake by Seely brought the two riders within a few inches of one another. Just after they crossed the finish line to start Lap 13, Tomac moved alongside Seely and made the pass through the whoops. Once out front, Tomac pulled away to take a comfortable win.

“The track really broke down out there. I just tried to be as consistent as I could and keep it on two wheels, and I started to close in on Cole [Seely],” explained Tomac. “He made a couple mistakes that allowed me to get on his rear fender and I just pulled the trigger in the whoops. One I got out front I was able to just get through lappers and bring it home.”

Dungey made a strong push as well in the closing laps and was able to also pass Seely to earn a runner-up finish and extend his podium streak to 15 races. Seely held on for third.

“The start wasn’t the greatest, and I had a couple close calls out there,” said Dungey. “The track got really nasty and with about five laps to go [after passing Seely] I just settled in. We’re moving forward [to the next race] happy. We got one more to go; we’ll give it all we got and hope for the best.”

Tomac and Seely, who sit behind Dungey in second and third in the 450SX Class point standings, further asserted their positions heading into the last race of the season.

GEICO Honda’s Justin Bogle, the defending Eastern Regional 250SX Class Champion, needed a win in order to even have a chance at repeating in 2015 and he got the start he needed in the Main Event by grabbing the SupercrossLive.com Holeshot Award. Musquin was right behind in second.

Musquin applied some early pressure on Bogle, but the Honda rider was able to fend it off and pull away. Behind the leaders Monster Energy/Pro Circuit/Kawasaki’s Joey Savatgy, who slotted into third, started to come under fire from Yamalube/Star Racing Yamaha’s Jeremy Martin, who started seventh, establishing an exciting battle for the last spot on the podium. On Lap 7, Martin briefly passed Savatgy going into a turn, but Savatgy got back under him and pushed him off the track. As this happened Musquin made another run on Bogle and closed in again, ultimately making the pass for the lead on Lap 10. Three laps later Martin and Savatgy resumed their battle for third, but this time Martin crashed while trying to turn under Savatgy.

Musquin pulled away over the final five laps of the 15-lap Main Event to take the win and the title. Bogle was second, while Savatgy earned his third straight podium finish.

“[The championship] feels great and winning the Main Event makes it even better,” boasted Musquin. “Every time you race you want to do good, and today I made it happen. I’m ready to move on and chase some more dreams. It has been great to race alongside Ryan [Dungey] this season with all his success [in the 450SX Class] and it’s helped me get better as well. We have a great team at KTM and I’m excited to keep it going.”

It marked the first time this season that Dungey and Musquin failed to win at the same race.

“It hurts to lose [the race] like that and hurts to lose this championship,” said Bogle. “I’ll just keep working. I’ll move to the 450SX Class next year, so I have a lot ahead of me.”