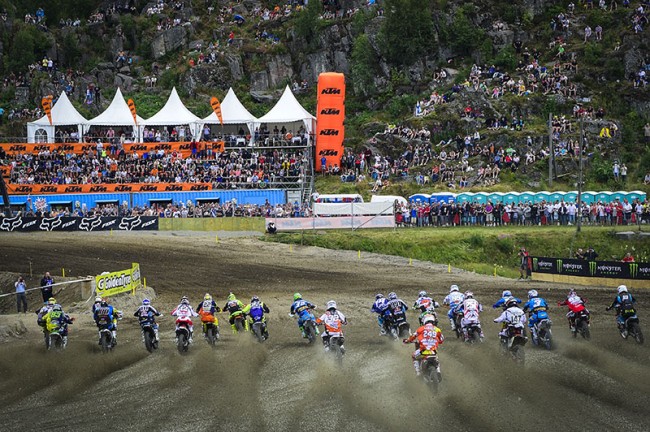 After a weekend off, the FIM Motocross World Championship will be back on track this weekend in Uddevalla for the eleventh round of the series.

Dating back to 1958, the circuit, which is described as hard pack with loose pebble-like topsoil, has hosted the Swedish round of the FIM Motocross World Championship twenty-one times. Impressively, fourteen of those twenty-one have been consecutive with this weekend, the MXGP of Sweden, being the fifteenth year in a row.

Also joining the FIM Motocross World Championship this weekend, rounds six and four of the European Championship EMX250 and EMX300 will take place. J-Tech Honda’s Nick Kouwenberg claimed the red plate in Germany and will be eager to maintain his tight lead over Kemea Yamaha Yamalube’s Damon Graulus in the premier European class, EMX250. Meanwhile, the EMX300 points leader, Wilvo Nestaan Husqvarna Racing’s Yentl Martens will be aiming for his third round win and/or fourth consecutive podium finish.

There is no rider more deserving of the MXGP red plate, at this moment in time, than Yamaha Factory Racing Yamalube’s Romain Febvre. The rookie has completely taken control of what is shaping up to be the craziest championship ever. With three consecutive MXGP round victories to his name, Febvre will head into this round with a nine point advantage over Red Bull IceOne Husqvarna’s Max Nagl who underwent surgery on his ankle last weekend and is yet to confirm if he will be racing or not.

Team HRC’s Gautier Paulin is not shy in admitting his sole goal is to win races. So far, the flamboyant Frenchman has three race wins he can be proud of and one grand prix victory. While for many riders, that would be a dream come true scenario, Paulin knows he is capable of a lot more and if he rides as smooth and aggressive as he did in the final race at the MXGP of Germany, great things are bound to happen.

After missing more than half of the season due to a thumb and wrist injury, The Kid, Rockstar Energy Suzuki World MXGP’s Kevin Strijbos is back and more lethal than before. What appears to be working in Kevin’s advantage is his crouching tiger approach to the races. Kevin is a very calculated rider, he hits his lines and he is patient, which with the choppiness and technicality of the tracks this year, his tact is definitely working to his advantage.

Meanwhile, fellow Belgian Jeremy Van Horebeek is starting to stabilize after a rocky start to the season. TheYamaha Factory Racing Yamalube rider was looking solid in Germany despite having a pretty weird crash in the second moto. Luckily the number 89 was quick to rebound from that mishap and still managed to take home fourth overall. If he can minimize his errors this weekend, a podium finish could be on the cards.

The same can be said for Team HRC’s Evgeny Bobryshev who is actually riding a lot faster than his results reflect. Coming out of turn one at pointy end of the pack has to be the ultimate goal for the Russian.

Mental strength, determination and heart for racing motocross are assets that are carrying the eight-time FIM Motocross World Champion Antonio Cairoli right now. It has been inspiring to see Tony’s grit over the past couple of rounds as he has raced through the pain of a broken arm. Hopefully the free weekend has done the champ a world of good but we will just have to wait and see.

Speaking of Red Bull KTM, the team has lost one but re-gained another with Keeno, Ken De Dycker, out with a broken shoulder. In better news, Tommy Searle has been spotted out throwing some insane whips in the United Kingdom, therefore we can only assume he will be back on the gate this weekend.

The MXGP of Sweden is the home race of last years surprise performer, 24MX Honda Racing’s Filip Bengtsson. Filibang, as he is known to his twitter fans, is more than capable of running the pace. Hopefully with the full support of the amazing Swedish fans, the Swede can pull something special out of the bag.

Most bench racers would have predicted Tim Gajser to be one of the championship contenders this year. The young Honda Gariboldi rider is capable of winning at any time, even with Jeffrey Herlings on the gate. After claiming his third MX2 round victory in Germany, Gajser has jumped to second in the championship, 100 points shy of Herlings.

Given a good start and Monster Energy DRT Kawasaki’s Max Anstie will always challenge for the race win. Give him two good starts and Max, who is undoubtedly one of the fastest riders in the class, is a good bet for the grand prix overall.

The current pace Standing Construct Yamaha Yamalube’s Valentin Guillod is running at the moment, even with four broken bones in his foot, suggests that he could be in line for a third grand prix victory this weekend.

Meanwhile, as the defending MX2 world champion, Monster Energy Kawasaki Racing Team’s Jordi Tixieris always expected to be in the mix. The talented Frenchman has threatened a race win here and there but hasn’t quite managed to seal the deal.

Keeping the bike on two wheels has been the biggest foe for Standing Construct Yamaha Yamalube’s Julien Lieber. After a super impressive start to the season, the small statured Belgian has hit a few potholes on his way to the top, but the good news is things are starting to look up.

The scrub is almost more important to kids these days that railing ruts and nailing berms, all those things that used to be fast, yet awesome. Although scrubs are arguably one of the most impressive techniques in our sport, if mastered, the risk almost outweighs the benefits. While someone crashing off of a scrub is almost more likely than not as it pushes the laws of physics, no one would have thought it would catch out one of the most talented MX2 riders to walk the planet, Red Bull KTM Factory Racing’s Jeffrey Herlings.  Regardless, JH84 still carries the torch in MX2 and was lucky to come away from that incident with just a broken collarbone, which he had plated immediately. KTM Racing is yet to confirm whether the Dutchman will be racing.