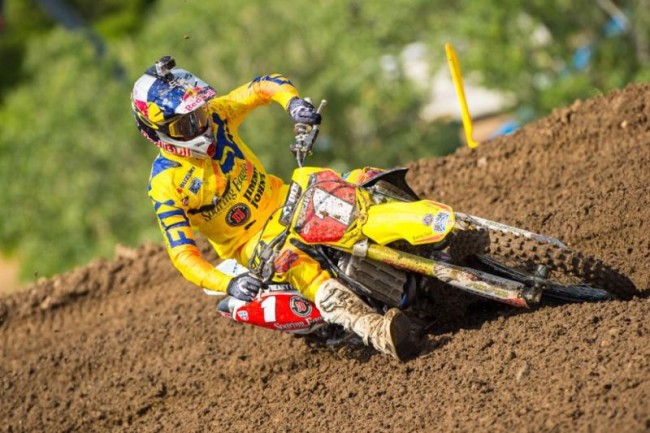 Suzuki are in a bit of trouble after losing title contender Clement Desalle to Kawasaki for 2016.

Remaining rider Kevin Strijbos has a contract offer but with Stefan Everts tipped to take over as manager it appears Strijbos wants confirmation that he can still work with Joel Smets, who is Suzuki’s current team trainer.

So it looks like Suzuki will need at least one or possibly two riders that can win races and challenge for a world title.

1. Ken Roczen – It’s not likely, but Roczen is having a terrible time in the USA this season. His team are having sponsorship issues, the team manager hasn’t been at any of the outdoor races and Ken is struggling for set-up and confidence. To add to that, his current mechanic is leaving him next season to go back to KTM and he has apparantly fallen out with his dad again. Roczen needs to re-discover the speed that took him to his mx2 world title, so it might just be worth Ken’s former team manager Stefan Everts giving Ken a call to see if there is any chance he would go for a second world championship, this time in the premier class.

2. Valentin Guillod – Guillod is likely to stay with his Standing construct team when he moves to MXGP (with a factory Yamaha) but it appears that Suzuki and KTM are still hoping to convince him to change his mind. Guillod is having the year of his life and is going for the MX2 world title now Herlings is injured. But Guillod’s style should also suit the 450, he battled Dungey at the 2013 MXDN on the big bike and if he can carry his speed into the MXGP class, he could be worth the extra effort to sign.

3. Arnaud Tonus – Tonus has the perfect style for a 450 and, after injury and illness strewn 2015 in America, the Swiss may regret having turned down a factory MXGP Honda ride for this season. Tonus has the talent to run amongst the big boys in MXGP and if Everts can make Tonus stronger in the head and increase his self- belief, it could be an inspired signing. But would  Mitch Payton let him go and would Tonus want to give up the supercross and sunshine of California to race the toughest motocross class in the world?

4. Dean Wilson –  It might be slightly risky going for an AMA-based rider with zero GP experience but Dean Wilson knows a lot more about World Championship racing than his American counterparts. His knowledge and respect of the championship would help him adjust quicker and with a US national title under his belt justifying his speed, plus the fan following from the USA he would bring to the championship and team, Dean would not be a bad choice at all, if he can be freed from his KTM contract.

5. Steven Frossard –  After sixth in a comeback season, Frossard was unfairly dumped out of Kawasaki to accommodate Ryan Villopoto’s wish for Tyla Rattray to be his teammate this season and it hasn’t went well for anyone involved with that decision. Both Villopoto and Rattray have retired while Frossard ended up quiting STR KTM after poor results to go back to KRT to replace Villopoto! Frossard has speed, podium speed but is susceptible to injuries and crashes. Would Suzuki take the risk with Frossard, maybe Everts can make the difference the Frenchman can harness his speed without the crashes.

6. Tommy Searle – The world is still waiting for Tommy Searle to discover his MX2 form in the MXGP class. It’s amazing to think that in three seasons, Searle has not had a podium in MXGP. Of course a lot of that is down to injuries, Searle still has the talent but he is in the last chance saloon. Could Everts get Searle back to where he was as an MX2 rider? Like Frossard talent and speed isn’t the issue and if Suzuki and Everts can find the missing link, Searle could still be a front runner in MXGP.