Suzuki trio Lawrence, Seewer and Strijbos on their MXoN Saturday 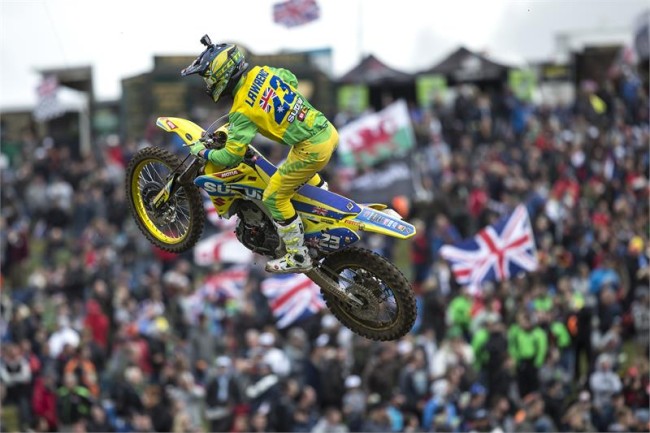 Jeremy Seewer and Hunter Lawrence both pulled holeshots on their Suzuki’s as they helped Switzerland and Australia to impressive qualifying results at the 2017 Motocross of Nations.

Lawrence would lead most of the MX2 race and ended up finishing second, while Seewer came home in third as he made his 450 debut in the Open class. Kevin Strijbos also rode well for Belgium, crossing the line in sixth position as all three riders helped their nations’ qualify with top-10 gate picks.

Continuing his good end-of-season form, Lawrence raced with real confidence against some much more experienced riders, leading the field and showcasing his talent at the biggest race of the year. “I got an awesome start with my RM-Z250, on this BMX-style start straight”, said Lawrence. “I pulled another holeshot, which obviously I was really happy with and then I put my head down to build a good lead. I tried and gave everything I had but I’m a bit annoyed to have lost it on the last lap. I almost made the pass back right at the end but I couldn’t get it done. Zach Osborne was riding really well though and fair play to him. I hope tomorrow I can go out and ride like I did today and give team Australia a good couple of results.”

After finishing second in the MX2 World Championship, Seewer started his new 450 career with a bang, jumping out to an early lead in the Open class qualification race. “It was nice to get a holeshot on what was my first big race on the RM-Z450WS. It just shows that I can do it when I get everything right and it feels so good to have done it at this race. Jeffrey Herlings passed me but he’s just on another level right now and I was just trying to be careful as the track was a little sketchy. I just wanted to have fun and relax and not push too hard, not do anything too crazy and make sure everything is good for tomorrow. I finished third pretty easily and I enjoyed riding so hopefully I can do the same in the two motos and help team Switzerland score some good points.”

Despite having difficulties early on, Strijbos rebounded in the qualification race, overcoming a bad gate pick to help Belgium qualify in seventh place. “Today was a struggle actually. In the practice I struggled so much with bike setup and getting everything right. I didn’t feel comfortable on the bike to begin with so we had to figure that out. Then we had a bad gate pick for the race after the ballot, I think it was 34th, so I couldn’t get out up front with the guys. I had to come through the pack, passed quite a few riders and I think I was faster than Dean Wilson even though I couldn’t pass him. I was happy with my riding though, despite my mistake on the last lap but it was better, I was feeling relaxed and comfortable and it should be good for the races tomorrow.”

So a very successful day for the three Suzuki World riders, helping their respective countries qualify with good gate picks for tomorrow’s main motos. With rain clouds looming, the track could change significantly before tomorrow but Seewer, Lawrence and Strijbos have all proved they have the speed to challenge up front for both individual and national glory.