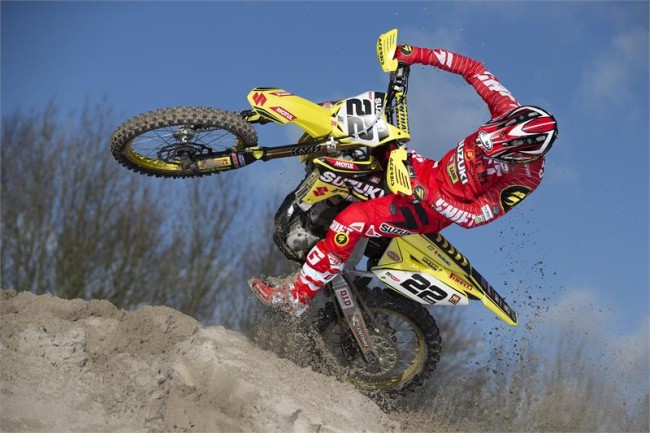 The sun will dip at Losail, Qatar this weekend to signal the rise of 18 rounds and eight months of a fresh FIM MXGP Motocross World Championship where Team Suzuki World MXGP will be at the heart of the action once more with its refined and honed RM-Z450 and RM-Z250 technology.

The Belgian factory team is now helmed by multi-World Champion Stefan Everts – one of the most-famous names in the annals of the sport – as he guides the development of the works bikes and the push for results and glory by riders Kevin Strijbos and Ben Townley (MXGP class), Jeremy Seewer and Brian Hsu (MX2) and Bas Vaessen (EMX250 European Championship).

For the fourth year-in-a-row the outstanding and unique racing facility of Losail will bring MXGP into life under lights and in the Qatari desert setting. The series heads east to enjoy temperatures in the mid-20s and then into a harsher climate – escaping the final throes of the European winter – with round two in Thailand a week later.

From the three previous editions of the Grand Prix, Suzuki guards pleasant memories of victory in 2013 and a podium appearance as runner-up in 2015. Now it is up to Strijbos (30 years old and riding # 22) and Townley (30 and with the #8 RM-Z450) to fix their sights on more MXGP prominence.

For Strijbos, the first round of 2016 will bring some relief. The Belgian was searching for fitness and confidence at Qatar in 2014 (a pre-season hip injury hindering his preparations) and 2015 (a sore wrist; an ailment that would ultimately force him out of action by the third race) but this time arrives in the Gulf region in shape and ready for action. “After two years with problems – my hip in 2014 and the inflammation around my wrist last season – it has been good to have a solid winter,” he says. “I changed my programme a bit and did a lot more riding and running in the last few months. It has been intense but I feel good. We had an issue in the pre-season races but we’ve worked through it and got things fixed and ready on the bike.”

Everts’ new regime for the team has seen the addition of several new faces and technical staff, as well as a priority for unity and co-ordination. For Suzuki stalwart Strijbos is has been a welcome change of scene and having Townley next to him in the awning has also brought a positive effect. “It has been great having Ben there,” he comments. “I’ve known him for a long time and we see each other practically every day. He’s obviously good to ride and train with but also wants to talk about the bike and the settings and we work together well. We can talk about things outside of racing and there is an environment that wasn’t there last year or the last couple of years.”

Townley will need a reference from Strijbos for the first laps around Losail. The latter endured his physical problems to capture eighth and ninth positions in the last two visits to the venue and knows the quick, wide and jumpy layout better than the New Zealander who will round the dirt for the first time this weekend.

“It is a fast track but also one where you need to find the right lines and set-up,” Strijbos reveals. “You have to concentrate on clearing the jumps and then making good time in the turns because that’s the only place where you can really make the difference. I think the ground was prepared really well in 2014 – I preferred that surface compared to the one last year – but we’ll see what we find this time.”

2004 MX2 World Champion and former AMA 250SX Supercross champ Townley is making something of a dream comeback to the Grand Prix fold after having stepped back from the sport in 2012; proving he still has the pace and skillset with an astonishing ride to second position at the 2015 Motocross of Nations, that the veteran could still provide some surprises in MXGP. The Kiwi – racing an RM-Z450 for the first time – is dealing with some inflammation and pain in his left knee after a racing incident at the Valence International in France last week. “I’m managing it into the best case that I can and I’m working with doctors in Belgium,” he said. “It is nothing major, fortunately, and hopefully it won’t set me back much. It was just a twist so I’ve had some swelling and a bit of pain…I did a full day on the bike yesterday, so it seems OK.”

Qatar will be his first Grand Prix as a full-time member of the paddock in almost four years. “I haven’t really looked at Qatar like a big, single important race but more like a season that is starting and I’m excited by that,” he claims. “I’ve been preparing for this and the last few weeks have been about finishing everything off. It has been a big period of preparation, starting months and even up to a year ago to reach this point.”

Townley has been using Strijbos as a ‘pace marker’ in training motos and tests but claims that he carries no guidelines for what he might achieve on his ‘reintroduction’ this weekend. “None at all, zero expectations,” he says. “The first five rounds will be about going out to race, focussing on the starts, getting myself into a decent position and letting the race come to me. We’ve all seen there is no issue with my speed but back-to-back weekends and the travel schedule…I haven’t done that in a number of years. So we’ll see where I end up in Qatar and go from there.”

Over in MX2 and Jeremy Seewer is a buzzing prospect in his third season (second full-time) in the class and on the RM-Z250.

The 21 year old captured three podium finishes in 2015 and was fifth best in the world. The Swiss has also enjoyed the altered environment around the Suzuki set-up since Everts took control towards the end of 2015. “I think the biggest difference has been how the team has come together,” he states. “Before we were doing our own thing and being professional about our preparation but now we had many more activities, training and testing sessions as one group and that is really great to be able to learn from other people.”

Seewer also has reason for optimism thanks to the progression made with the performance of the RM-Z250: “We focussed on the engine right away and I have to say the difference is like night and day. I wanted better starts and I’m convinced I will have them with the package we have now.”

After moving-up the rankings every season and reaching his goals of a top-10 standing in 2014 and top-five in 2015, the #91 now has his sights on further achievement: “Last year I had a few very good races and my goal is to do that again but on a regular basis,” he says. “It has been a good winter of work and I’m feeling positive about our chances.”

Qatar will not only be a stimulating and nervy time for the athletes but also for Everts who gets to field his set-up and vision of a full factory team for the first time. “I’m very excited…a new start,” he enthused. “It has been a long and busy winter with a lot of good work and I really want to thank all the guys in the team for the big effort we made and their high motivation to start the season. I’m really happy with the overseas set-up that we have.”

“I’m not too focussed on results for Qatar, I think both MXGP riders have decent chances but we want to get the show running and then head onto Thailand and really get ‘into’ the season,” he adds. “We’ll be keeping our feet on the ground at Losail because we know how many motos are ahead of us. For Jeremy, I think he can think about fighting for the podium in MX2 and I know he wants to begin the season in the right way. Overall we’ll be looking for some good racing and a positive launch to 2016.”