Suzuki ready for “home” round of MXGP 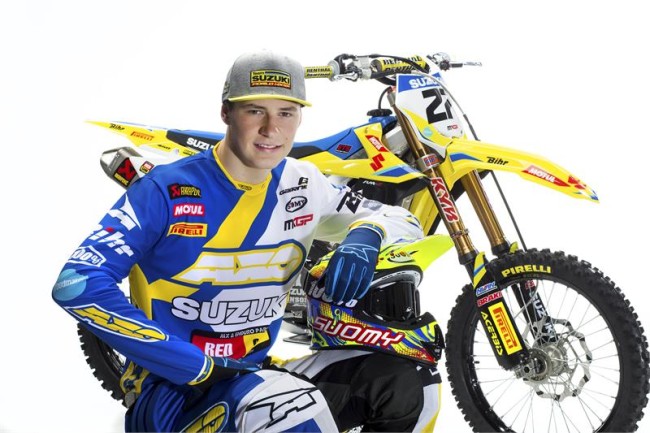 The full Suzuki World MXGP and MX2 teams are raring to go as the 2017 World Motocross Championships heads to Lommel, Belgium, just a few hundred metres from the team’s headquarters. Led by 2016 Belgian GP winner Kevin Strijbos, the squad of Arminas Jasikonis, Jeremy Seewer, Hunter Lawrence and Bas Vaessen are all looking forward to their home race and a chance to show off their skills on what is known as one of the toughest motocross races in the world.

The Lommel track layout has been changed around a lot since Strijbos’ victory on Suzuki last year but the deep, deep sand still remains, ready to make life difficult for every single rider. Unfortunately for Jasikonis, his race will be even tougher after he injured himself a couple of days ago. “I picked up a little injury to my ribs after Loket, which I just got checked out by a doctor and thankfully he says nothing is broken,” said Jasikonis. “Obviously though it is not ideal preparation before such a tough sand GP. I’m still going to try and do my best out there though and I still feel like I can do well and I’m also still really excited for Lommel, despite it being difficult with this rib problem. I’m just going to go out there without too much expectation and put on a good show for all the fans and for all the Suzuki World MXGP team members and supporters who will be watching.”

Strijbos would obviously love a repeat performance of 2016, but with so little bike time after his injuries, his expectations have been tempered somewhat. Instead, the Belgian just wants to make sure his home supporters go home happy. He had this to say about his time-off after the Czech GP: “My arm is getting better. The infection is out which is obviously a good thing but it did mean that I couldn’t do too much after Loket while I was waiting for it to heal. The doctors cleaned it all under local anaesthetic but then informed me that it was best if I avoided sweating, so that meant I couldn’t really do anything. The first I rode was this past weekend for a race in Belgium. I’m always looking forward to Lommel, it’s a special place, it always gets really rough and it’s always a busy GP because it’s the teams and my home GP. I feel good but there is a question mark over how prepared I’ll be for the weekend as I haven’t been able to do as much as I wanted in the sand. I want to be positive though and although I’m not sure I’ll be able to win the event like I did last year, I still want to give it everything I have for all the fans. It was a great moment for me and for the team, so it’d be great if we could do it again, but I just want to put in a good performance.”

For Seewer, Lommel is a good race for him to get his MX2 title hopes back on track. After dropping points to Pauls Jonass in the Czech Republic, Seewer believes that the deep sand of Lommel is a good opportunity for him to claim back those points and more, since he’s lived here for quite a while now. “Since Loket we’ve done a lot of sand riding in order to get strong for Lommel. I didn’t do a race, just put in a lot of laps on the sandy practice tracks. I’m looking forward to it though as it’s a home GP for the team and almost a home GP for me as I’ve been living in Belgium for quite some time now. I think it’ll be a good GP as I’ve been riding in the sand a lot and things are going well. I feel ready for it and I feel like I’ve prepared as much as I can for the weekend, in order to try and get back to winning ways.”

Expectations are slightly different for Lawrence, who is still looking to get back to 100% fitness after his long absence. The Czech GP went really well considering his lack of bike time, but Lommel is one track that will punish any weaknesses. However, as always, Lawrence is in buoyant mood and ready for the gate to drop. “I’m definitely looking forward to Lommel, I think everyone is. Although I’m not sure how many people will be saying that afterwards as it’s always a brutal experience. Since Loket, I’ve tried to do as much riding and quality bike time as possible. I think my fitness is getting better, bit by bit I’m getting it back. It’s still not what it was because my incident but we’re working on it to make the best it can be for the weekend. It’s nice to have it as a home GP and a home GP for the team so I’m looking forward to it and hopefully we can have a good weekend.”

After a difficult couple of rounds, Vaessen is looking to get back to the form that saw him finish fifth overall at the last sandy GP in Ottobiano, Italy. “I’ve been just trying to get back into my groove these past two weeks. I’ve healed up from my leg injury which I sustained in Loket and basically all I’ve been doing is practicing and resting, practicing and resting. Lommel will be a really tough race but I’m really excited for it as it’s almost my home GP and I want to do the best that I can in a track that I really enjoy riding. I can’t wait!”

So while it is a little disappointing that a couple of the Suzuki World MXGP team won’t be 100% prepared, all five riders will certainly be giving it their all as they hope to try and get another Suzuki win at their home GP in 2017.